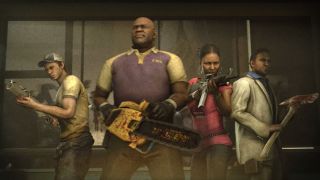 Valve fans are all Prometheus, doomed to forever be teased by leaks and rumors of sequels that will absolutely never be made. The latest bittersweet tease comes from screenshots which are allegedly from an ancient build of Left 4 Dead 3, and which YouTuber Tyler McVicker (AKA Valve News Network) shared in a recent video and Imgur dump. Well, I say bittersweet, but this purported leak is all bitter and no sweet. Behold, 29 screenshots encapsulated in one image:

Did you get all that? Taking all that in?

Left 4 Dead 3 was reportedly cancelled a few years ago, but it still manages to crop up just often enough for devoted fans of the series to hold out hope. So when McVicker said he had 29 screenshots to share, plenty of ears perked up. Alas, these screenshots - whatever they're from - are brown and boring and utterly devoid of details. Here's another choice example:

Oh my goodness, there are gray clay walls in that one. Excuse me while I polish the edge of my seat.

At a glance, I'd probably guess these screenshots are just map assets pulled from Counter-Strike: Global Offensive - which makes a strange sort of sense given the Source engine connection. Hell, just looking at them, they could be from any game. The Middle Eastern environment could have come from an old Call of Duty or Battlefield. Then again, if you were to strip out everything from Left 4 Dead 2's environments, they probably wouldn't look terribly exciting either. In any case, we can safely slide Left 4 Dead 3 to the back burner - and then slide it right off the back burner until it falls behind the stove where it belongs.

In the absence of Left 4 Dead 3, here are the 25 best co-op games that actually exist. Diehard Left 4 Dead fans can also pin their hopes on Back 4 Blood, a spiritual successor from the series' creators.