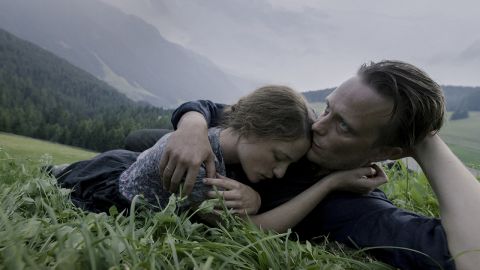 A Hidden Life is the most soulful war movie since The Thin Red Line: elegiac, emotional and exquisitely shot. Malick’s back!

The myth of Terrence Malick isn’t what it once was. After bagging the Palme d’Or for The Tree Of Life (2011), a subsequent trilogy of fractured, frustrating dramas (To The Wonder, Knight Of Cups, Song To Song) left many wondering if he’d jumped the shark. Mercifully returning to the relative simplicity of a linear story told with clarity and purpose, the real-life-inspired A Hidden Life is a return to form for one of US cinema’s most enigmatic auteurs.

It’s set in remote Austrian village St Radegund at the outbreak of WW2. Franz (August Diehl) and Franziska (Valerie Pachner) go about their peaceful life as farmers, elegiacally narrating their meet-cute over breezy flashbacks. In 1940, Franz is enlisted in the German army. Though refusing to take the required oath to Hitler, he’s allowed to return home. But when he refuses to return a Nazi salute in the street, his status as a traitor to the Fatherland soon spreads. This opening hour is resplendent. The beauty of Franz’s home life is in stark contrast to the ugliness of war, which never reaches St Radegund’s borders in the traditional war movie way – you barely see a gun in the entire film – but is thoroughly explored through Franz’s spiritual crisis over the next two hours.

Whether coincidence or a consequence of his now open defiance of Nazi leadership, Franz is re-conscripted into the Wehrmacht in ’43, and imprisoned after refusing to take the oath. Malick occasionally returns to Franziska and their three daughters, who become ostracised, but also experience acts of kindness – just as Franz meets more reasoned voices during his incarceration, including Matthias Schoenaerts and Bruno Ganz as German officers who indulge in bouts of philosophising with him. This is far from a black and white condemnation of sympathisers at the expense of the honourable resistance.

Unlike his most recent trilogy, this subject matter is entirely deserving of such poetic treatment: swooping shots along naturally lit locations; lingering inserts of trees; Thomas Newton Howard’s achingly emotional strings; and practically whispered, near-omnipresent narration. Malick has always been an unparalleled visualist, but here he also batters you emotionally as the film inches towards its inevitable conclusion.

There are niggles. By design you never get a sense of the bigger picture, even for Radegund. For reasons that aren’t entirely clear, characters jump between English and German. And if the cult of Malick has bemused you to date, don’t expect A Hidden Life to convert. But for anyone who’s been waiting eight years for Malick to get his groove back, the myth-maker has returned.

A Hidden Life review: "Terrence Malick gets his groove back"

A Hidden Life is the most soulful war movie since The Thin Red Line: elegiac, emotional and exquisitely shot. Malick’s back!