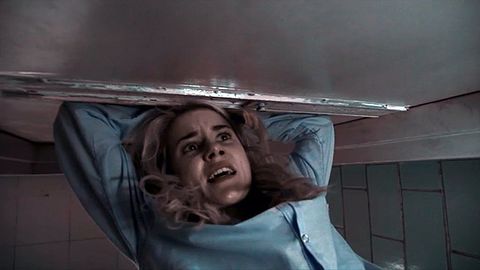 THE ONE WHERE Jane disappears for a short while and we discover the real reason Alex is interested in Brian.

VERDICT So many potentially interesting things happen in what is easily the poorest episode of the season so far, and it’s difficult to work out exactly how the programme makers were able to screw them all up.

Jane’s disappearance into the bowels of the Drake at the end of the previous episode causes Henry to (quite rightly) worry about her, but as she appears scant minutes into the episode, any sense of danger is lost; how much more effective it would have been to have her missing for the entire episode, or at least to appear only at the very end of this one. Oh, and the brief glimpse we get of her after descending the steps makes it look like she’s in a version of hell created by a seven year-old with access to Photoshop and stock images of New York. And that opening montage of Jane giving various warnings to Henry is one of the most cringe-worthy sequences to have graced our screens so far this year!

Still – Kandinsky’s a good villain, and Shaw’s an interesting character, so the torture scene ought to be good value, right? Wrong. Shaw, tied to a chair, is punched a few times by our master assassin, and even though we cut away from the scene a few times we never get the impression that Shaw has really been put through the mill. It doesn’t help that the amount of blood on his shirt is so small that he might have just cut himself shaving. Shaw’s later revelation that Gavin was responsible for Shaw’s daddy leaving the family is not totally unexpected, but at least helps to round the character. What a shame, then, that Gavin’s impression of Shaw’s father is so predictable and poorly executed.

Meanwhile, in the mental wing of the hospital, Jane discovers that there’s another patient babbling on about a spiral staircase, so she manages (of course) to sneak into the high security section and speak to him. She asks what happened when he went down the stairs, only to be told, “I came up the stairs!” Dun Dun DUNNNNNN. A slice of cheesy melodrama with your tea, Vicar?

Gavin discovers that the red box is hidden in a church, and he enters to a cover version of the Stones’ classic “Sympathy For The Devil” – oh, so he’s a bit evil, is he? Perhaps the devil? And there were we, thinking he was just a misunderstood orphan, to be redeemed in the final reel! How could we have been so foolish?

Meanwhile, Brian has been writing up a storm. Everything he writes is gold (perhaps he could write an episode of 666 …?) and things just couldn’t be better! After rejecting Alex, though, he finds himself unable to write another word – literally. His laptop won’t work, pencils keep breaking on him, and the ink in all his pens dries up. Alex is his muse. This would have been so much better if, when Brian finds his laptop not working he didn’t utter the line, “and I just replaced the logic board!” in order to point out to the viewer how odd it is that his keyboard isn’t working. Honestly, we’d have got it after seeing the ballpoint not working, and the pencil break. To write down to your viewers is insulting; to do it badly, doubly so.

Alex later visits Gavin to say she’s feeling guilty about seducing Brian – her actions are evidently payment for some past favour. And Brian’s writing success is undoubtedly going to be repaid at some point, too.

Jane is later kidnapped from her room in a desperate attempt to inject some excitement into the episode. Her “kidnapper” turns out to be a doctor, who releases her as a favour to our favourite cop.

Perhaps the most (only?) interesting aspect of this week’s episode is the revelation (by Shaw) that Gavin and Olivia’s daughter is still alive. Olivia frees Shaw (who, to be fair, has only been tied to a chair in an unguarded room) in order to obtain proof.

BEST LINE
Gavin (to priest): “Forgive me father, for I have sinned. But all things considered, that’s a tall order for someone like you to absolve someone like me.”