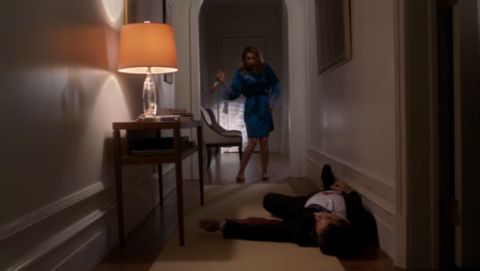 THE ONE WHERE wW find that the Drake has thousands of starlings living in its walls, and that history has a way of repeating itself.

VERDICT Another decent – if distinctly unterrifying – episode, in which we discover that Gavin has very special plans for Henry.

Alexis surprises Brian by greeting him has he leaves his shower (his wife had previously given her a key so she could get paperwork for her) and he resists her advances – for now, at least.

Jane sleepwalks and finds she is able to go into the room hidden by the false wall in the basement. She discovers a dead body, and then... wakes up. Hmmm.

She has also hired an exterminator to rid the Drake of the starlings that nest within its walls. Nona takes something from him, and sees a vision of him being attacked by the birds. She warns him that he's "going to make them upset". He does, and they subsequently attack, causing him to fall in front of a moving vehicle. A show more confident in its horror might have presented the death solely at the hands – beaks? – of its feathered antagonists.

In one of the most interesting storylines so far, we meet Daniele, a woman unlucky in love, but determined to find it. Gavin introduces her to a business rival. She falls for him, and they spend the night together. When he tries to leave (to get back to his wife) she loses control and brutally stabs him to death – he is the dead man Jane saw in her dream. Gavin tells Daniele he will help her. When she looks in the mirror she sees the face of a much older woman, and Gavin reminds her of a series of almost identical crimes of passion over the last few decades – crimes which she committed, while appearing to be the same age in each era. When next we meet her, she has forgotten these events, and is looking forward once more to finding love – with Gavin's encouragement.

Meanwhile, Henry has discovered that a deal Gavin has just made is going to go bad, but as the information is privileged, he is unable to tell his new boss. Gavin doesn't go through with the deal, but tells Henry that he is impressed by Henry's ethical stance in not giving him the information just to curry favour. Henry appears to have passed an important test.

Ornithologists will be pleased to note that at the end of the episode the starlings were given a stay of execution.

The soul-trade-of-the-week storylines are still new enough to remain fresh, but the show will need to start ramping up the tension in the series arc if it is to stay watchable.

MURMURATION is the collective noun for a group of starlings. Other avian groups include a murder (of crows), a kit (of pigeons), an exhalation (of larks).

BEST LINE
Gavin (twice): “Finding love makes it worth the pain of searching for it.”