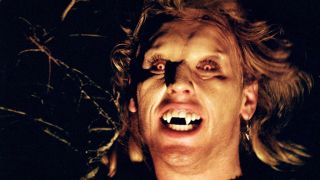 Vampires weren’t always ridiculously sexy. Why would you want to wear a cape, swirl around as a bunch of bats, or sound like The Count from Sesame Street? Bloodsucking? Urgh. But it only took one film to change our ideas of vampires for good. The Lost Boys, released in 1987 and directed by Joel Schumacher, revolutionised teen bloodsucking with its blend of ultra cool creatures of the night riding motorcycles around a thinly disguised Santa Cruz. Who needs California sunlight when there is endless fun to to be had as an immortal teen bloodsucker? Now celebrated as a cult classic, The Lost Boys means Schumacher’s bloody fingerprints are all over modern horror. Here are the 5 movies and TV shows we would never have had if it wasn’t for Kiefer Sutherland and his motley, if exceptionally thirsty, crew.

If The Lost Boys made vampires cool, Buffy made turning them to dust a toothy artform in a pair of Ray Bans. Joss Whedon’s stratospherically successful teen drama with bonus demons takes everything that made The Lost Boys tick and slots it perfectly into a high school setting. Vampires with glowing yellow eyes? Check. Brooding, ridiculously cool Angel as well as the usual stake fodder? Also check. Schumacher’s effortless blend of horror and comedy one liners led the way for Buffy’s now infamously witty script as one girl in all the world takes on the forces of evil and wins. Thanks Joel, we owe you one.

2.Interview with the Vampire

It might not look like a direct link immediately as Tom Cruise and Brad Pitt go back to the 18th century in 1994’s Interview with the Vampire, but staying immortal and handsome has never looked this good. He might not be wearing leather but Cruise’s Lestat is a vampire rockstar, at least for a while, taking what he wants from the world for decades without a single wrinkle or hair out of place. Before Louis interrupts his perfect world with those pesky morals, Lestat wears expensive clothes, lives in decadence, and drinks the blood of the rich like wine. Yum.

Love them or hate them, the Twilight books and movies just wouldn’t exist if The Lost Boys hadn’t made bloodsucking quite such an attractive teen trope. Edward Cullen and his sparkly but deadly beautiful family might be vegetarian when it comes to humans but the bloodsucking appeal is still there for Bella Swan. Fans of the Lost Boys could only ever be Team Edward as the pair battle out their angsty star-crossed love affair with the added risk of him draining her dry. Sure he’ll leave you bruised and with an actual monster baby but what’s not to love?

By the late 90s’ vampires were running riot through modern cinema. Again with the focus more on slaying than celebrating our favourite monsters, Wesley Snipes’ Blade is a leather-clad half human, bloodsucker hybrid with a serious bone to pick with the undead for murdering his mother. Nightclubs full of young beautiful vampires and the constant battle over the morals of being murderous and immortal, Blade has everything The Lost Boys made so attractive on a Santa Cruz beach. It’s also worth noting that Kiefer Sutherland’s David would be no match for this vampire slayer.

5. What We Do In The Shadows

Even 30 years on, The Lost Boys still has its clutches in modern horror. Mockumentary What We Do In The Shadows from Jermaine Clement and Taika Waititi is more hilarious than horrifying, but the idea of a pack of young vampires in a houseshare definitely has one movie to blame. Sure there are chores to be done as well as mentions of Keifer and co not showing what it’s like to be a ‘real vampire,’ but there’s even a direct loving reference to The Lost Boys Chinese noodles/earthworms scene. Once again spaghetti is transformed into a wriggling mass of worms for entertainment with vampire hypnosis. Being immortal, those cheeky vamps have got to get their kicks somehow, eh?

For the best in Horror to own now, click for DVD or Blu-ray; or watch on Amazon Video