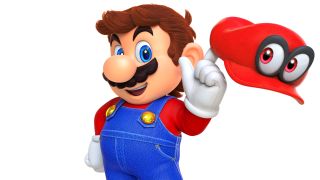 True to its word, Nintendo gave us all a meaty chunk of Super Mario Odyssey gameplay to chew on at E3 2017. And what a chunk it was, starting with the reveal of a T-rex wearing Mario's new (sentient) hat and revealing that players will be able to control anything that can wear the adorable little body snatcher:

There's a ton of new gameplay details to pick apart here, so I'm just gonna list 'em off, bullet point (or would it be Bullet Bill?) style in the order they appear:

Welcome to the world(s)

An evil wedding planner family and a few surprises