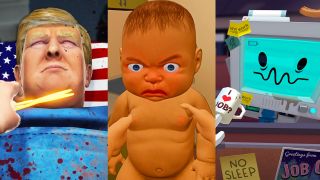 With the launch of Jurassic World Evolution, I've fallen deep into a well of simulation games and I fear I'll never get out again. That's partly because Jurassic World Evolution is so utterly brilliant, but also because I've discovered the strange and glorious simulation genre en masse. While there are authentic - and perplexingly addictive - games like train and bus simulators, along with the big daddies like The Sims, Sim City and Planet Coaster, there's also a corner for the weird and wonderful, from the 'psychological horror' of Mother Simulator (don't scoff until you've seen the trailer below) to the fixer-upper thrills of House Flipper. So for your work-away-from-work pleasure, here are the top ten most ridiculous sim games I've found on Steam. Trust me, you'll want to check this little lot out for yourselves.

Okay, so before you dismiss this as a load of trash bear with me. Yes, there are definitely plenty of downsides to collecting rubbish and cleaning the streets: unsociable working hours; having to deal with other people's trash; unflatting uniforms usually in neon colours; and… the smell. But there's the peace of the early mornings, and the idea that you're cleaning the world one street at a time too. That's probably the reason why City Sweeper has appeared on the Steam Store, offering your unfulfilled trash cleaning dreams for the low low price of $4.99 / £3.99. You won't be touching all those gross bin bags, but instead piloting your very own, very square and very slow street sweeper.

It's not quite on par with the Septic Avenger missions from Saints Row 2, but you're probably the crew following behind those poop flingers. There's a certain calmness to cleaning the streets and watching all the crud disappear, managing your waste and fuel levels and keeping those cities looking shiny. Kudos to whoever made this strange little game, and good luck with that obsessive cleaning problem.

If you're anything like me, you put off cleaning the house as much as humanly possible, because at the end of the day, it might be a great thing to do, but it's dreadfully boring. Why then is there so much pleasure in the mundanity of cleaning when it's in game form? House Flipper has absolutely nailed that intense feeling of satisfaction of a job well done in its gameplay, even though a game about renovation on paper might sound like literally watching paint dry in real time. You buy a run down property, clean it up, fix anything that's broken and then kit it out with new fittings, fixtures and furniture just like you would in The Sims before selling it on again, hopefully at a massive profit. You don't get into the house flipping business for fun - unless you're playing House Flipper anyway - and keep that dream of being a property mogul alive. Now pass me that paintbrush.

When a simulation game is basically like inception, things can basically get a little bit confusing. So when you've built your very own high-end gaming PC, and then you’re playing a PC Building Simulator on it, things get a bit trippy. Do you just miss the actual process of building a PC? Are you constantly looking for better ways to optimise space in your tower? Or being able to cram a 4K PC into a box thinner than an Xbox One X? We know it's possible, but actually doing it real life takes time, patience, and, more importantly, money. Thanks to Bitcoin, prices for PC components are through the roof nowadays, but with the PC Building Simulator its free to mess about with the best kit money can buy. And this is actual kit mind you, as PC Building Simulator has partners in Arctic, Cooler Master, Corsair, EVGA, and more, so this might be the beginning of a very expensive gaming experience for some people. Of course, it also happens to be a learning tool for understanding how to build a PC, and even lets you run your own repair and PC Building shop with the career mode. Just prepare yourself for using a PC while you’re on your own PC in real life to feel a bit strange.

Simulating: The aftermatch from a trip to IKEA

There's only one thing better than a weekend trip to IKEA: getting home and building everything you bought in IKEA. But in reality, you can't just keep going to IKEA every weekend, because eventually you won't be able to move in your house for furniture and you'll be flat broke. But thankfully, there's another way to get that IKEA building fix: the incredibly undersold game of Home Improvisation: Furniture Sandbox. Not in any way affiliated with IKEA of course, Home Improvisation still manages to channel that almost Lego-like feeling of following instructions and ending up with an incredibly satisfying end result from all those planks and screws you started out with. Except, as the title suggests, with Home Improvisation, there's a lot more improvisation involved here because there are no instructions whatsoever. Take those weird bits and pieces and create whatever you want, this is your time to prove to IKEA and Lego that you're the Master Builder. Heck, even make it in VR and size yourself up next to your creations without the fear of hurting your back, pulling a muscle or getting a splinter.

Okay, so of all the simulated jobs on this list, some people might actually want to be a surgeon, but perhaps not for the kind of patients you have to treat in Surgeon Simulator. Although you might be skipping straight to the operating table, the notoriously tricky in-game controls - each finger is controlled by a different key, for example - means that everything is even trickier than it would be in real-life. It also doesn't help that along with 'normal' humans, you'll also be tasked with operating on a few unusual customers, notably The Heavy from TF2, an alien, and… well… Donald Trump. It's OTT, it's messy and it's filled with seriously dark humour, most of which is totally unexpected with a game with this title. It might sound serious, but it's not, but that's part of the appeal.

We've all felt the blight of a fly. Whether they're crawling over your picnic food, walking on your freshly baked cake, or simply flying in strange squares in the centre of your living room, they're annoying. Is it strange to take some pleasure in swatting them out of existence? Especially when you've left the window open and tried to coax them towards it so many times you're already reaching for the swatter? If you really take pleasure in all that, it turns out there's a game for you. And not just any game, a VR fly swatting game. You're running a fish shop that happens to also double as Fly City, and if a fly touches your produce you're going to get contamination and lose business. The only thing to do is destroy them before they touch the merchandise, so grab your swatter and a can of insecticide and get comboing up your bug kills to work your way through to the ultimate weapons. This is fly swatting like you never even imagined was possible.

How would you like to work 9 to 5 in an office, in a convenience store, as a mechanic or even a very basic chef? Not feeling inspired? What if I told you that you could do any of those in a game? Even less inspired? Well, before you carry on scrolling, bear with me, because the actual versions of these mundane jobs have been created as simulations within a simulation game by computer-shaped robots that have got their information a little… askew. Before too long you'll be eating mouldy doughnuts in an office and having more fun than anyone in a 6x6 foot cubicle has any right to be. And that's before you realise that the microwave in the kitchen as a cook can create weird combinations for any items that you throw inside it. These are mundane jobs, but not as you know them, and discovering just how wrong the job roles are is all part of the fun.

Simulating: Motherhood and all its horrors

So there's been plenty of parenthood / life simulators in the past - just look at the entire Sims franchise - but I don't think that any of them have encapsulated the deep seated fear that comes before having a child in game form. You know it's worrying when something called Mother Simulator is tagged psychological horror… But basically, this is a VR game that intends to make you feel worried, annoyed, stressed and all the emotions that come with looking after a newborn that feels like the devil in disguise. Of course, there are unrealistic game elements to it - please don't slam dunk your newborn into a toilet - and (hopefully) the manicness of it all is sensationalized, but if you're not terrified enough of parenthood by the end of it, just watch to the end of this teaser trailer and try not to tell me otherwise:

Simulating: Becoming a millionaire before your 21st birthday

If you're anything like me, you're still kicking yourself that you missed the YouTube boat. We could all totally be running our uber successful YouTube channels now on cakes and puppies and be millionaires if we'd just gotten the memo like 10 years ago, right? Until someone invents a time machine though, we can pretend we caught the YouTube wave along with the Zoellas of this world with a simulation game dedicated to it. Yes, really. Very much a zeitgeist of our current gaming climate, YouTuber's Life is actually brilliant fun disguised as a management sim. Just make sure you stream enough to keep your follower count up while leading the life of one of the most popular people on the planet. And if you really want to drill down into this streamer lifestyle, you can also grab the first episode of eSports Life: Dreams of Glory. You know you want it just as bad as your reflexes have gotten over the years.

Heartbreak High: A Break Up Simulator

Simulating: Being a heartless biatch

From one kind of popularity to another: high school popularity. Imagine the stress of being so popular that literally everyone in your school wanted to date you, and then you end up dating all of them at once like some extreme polyamorist. But the problem is that you've actually decided to dump them all, one by one, in a single day - and there's only 40 minutes until the end of the school day. Cue the speed break-ups, back to back, that you'll have to deal with as much tactfulness and sympathy as you can muster, or defeat them in a minigame. Everyone has their coping mechanisms, right?

Have we missed a byzantine simulation game that yearns for recognition? Or have you become addicted to emptying virtual office bins? Let us know in the comments below.