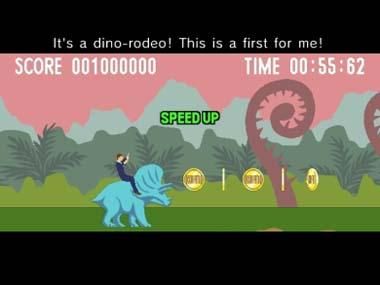 It’s the bit where he breakdances with an astronaut on the moon. Wait, no, it’s the part where the salaryman in Tomena Sanner uses a bowling ball to topple a line of Frankensteins in Hell. Actually, it’s the section where he dropkicks a man in a giraffe suit, dances with a schoolgirl, befuddles a robot, then slaps a Mexican wrestler in the face. Picking a highlight in Tomena is like picking a lowlight in The Hills; it’s a fool’s errand because the game contains nothing else.

There are nine stages, each lasting a minute or so, and as a besuited man with no facial features your job is merely to reach the exit, before celebrating with a victory dance. (There’s split-screen, four-man multiplayer too.) The man runs right automatically and you only use one button, tapping A to dodge obstacles like women, joggers and manholes. The closer you are to the obstacle without hitting it, the better your score; each successful interaction grants a speed boost and a sliver of extra time.

Tomena is closer to a rhythm game than a platformer, and this is reinforced not just by the victory dance but also by the frequent mid-stage boogie. It’s not a difficult or long game on Normal (once you get the hang of the timing), but you’ll be chipping away at the double-speed Turbo mode forever, giving you plenty of opportunity to explore the nine different levels.

It isn’t astonishingly deep either, but Tomena is hilarious, and despite requiring only one finger it’s one of the purest games you’ll find on WiiWare. This is a game you’ll want to run and shout about immediately – if only all those dinosaurs and robots weren’t in your way.