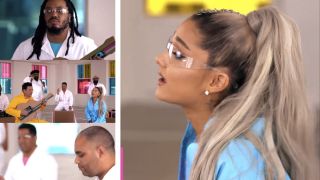 We've already seen Nintendo Labo turn the Switch from a handheld / home console hybrid into a device that powers fantasies ranging from smashing buildings as a giant robot to calm afternoons spent fishing indoors. But it can also do a whole lot more - including a few tricks you can do yourself, like turning Nintendo Labo into a digital guitar. And yesterday, as part of The Tonight Show with Jimmy Fallon, Nintendo Labo was used to recreate an Ariana Grande pop song.

The music may not be to everyone's tastes, but the feat is dang impressive nonetheless. After listening to the original version, it's pretty amazing that these combinations of cardboard and what's essentially a Nintendo tablet come so close to replicating it.

While certainly more advanced, the idea isn't that far removed from Wii Music. But where that game (and I use the word "game" generously) was bumbling, inaccurate, and awkward as heck to watch on an E3 stage...

...you can see how the Nintendo Switch - with some software fiddling and a few homemade cardboard cutouts - is smooth, accurate, and maybe even a little bit stylish, in an 'OKGO music video' kind of way. How far we've come in 10 years, huh?

Interestingly, despite not really advertising herself as particularly interested in video games, this isn't Grande's first foray into the industry. In spring 2017, she came to Final Fantasy Brave Exvius as a playable character, fighting alongside a staple of Square Enix heroes. Okay, technically it was "DW," a character based on Grande as she appeared on the cover of her album, Dangerous Woman - I say it still counts.

Maybe she'll show up as part of the Super Smash Bros. for Switch roster next?