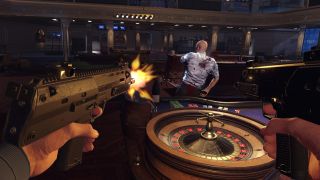 “I think of the London Heist as being very much our love letter as a studio to the Guy Ritchie/ Cockney gangster/Snatch/Lock, Stock kind of movies, and it was very much in that world,” Stuart Whyte, director of VR product development at Sony’s London Studio, says of what was for many the standout demo of the VR Worlds lineup.

That experience features plenty of action but it takes the form of shootouts where you are placed in one static point and have to defend yourself from there. The upcoming Blood & Truth massively expands this core gameplay feature yet is also a departure from that earlier title. “Blood & Truth is still in London, but I don’t think of it in that way,” Stuart Whyte clarifies, “For us Blood & Truth is very much inspired by our favourite action movies [but] this isn’t a Guy Ritchie movie [...] it is much more an action movie where you get to be the action hero.”

Playing an early mission as SAS-trained soldier Ryan Marks, we definitely feel like one. Exploring Marks’ military past, we get to grips with handling our weapon and our very particular set of skills, and from there it’s not long before we’re running and gunning with the best of them.

Marks of a hero

Given the go-ahead to enter an enemy base and rescue our captured comrade, we familiarise ourselves with the basics of movement. During firefights, in addition to peeking out from behind cover we can strafe by pressing [TRIANGLE] or [SQUARE], and on- screen prompts guide us through a new node-based locomotion system – all we need to do is look and then press the centre Move button to advance. These prompts and the on-rails movement are justified in-universe as a mechanical metaphor for Marks’ training guiding him through the mission but they also allow the developers to deliver impressively choreographed set-pieces later down the line.

While playable with a DualShock 4, Blood & Truth is designed with a pair of PS Move controllers in mind. After climbing ladders, rifling through drawers, and learning to pick locks, it’s time to get acquainted with our arsenal. You can dual-wield and make the most of two separate controllers but it’s easier to reload while wielding one gun at a time as you need your free hand to grab ammo (either strapped to your chest or hidden in the environment), and pressing down both central Move buttons slows down the world for a healthy dose of bullet time.

While you’re well within your rights to spray and pray, every gun we pick up is equipped with a digital sight for sharp shooting, which is particularly handy for taking aim at white target collectibles hidden around the level. It’s very useful indeed when, comrade rescued, we’re attempting to make our escape but the enemy tears after us on bikes and trucks with lovely, bright red gas tanks exposed. Needless to say, we enjoy an explosive car chase before we learn about the tragic circumstances that call Ryan Marks back home to his estranged family.

Blood & Truth aims to combine the thrill of John Wick’s hyper-trained gun fu with bombastic Bond-esque set pieces and just a dash of Die Hard’s humour. While the developers are committed to delivering on the fantasy of emulating each of these film series’ heroes and are less concerned with realism, they did consult with real-life ex-SAS soldier Kevin Godlington. “We didn’t engage with him to make it realistic because we weren’t overly bothered about that, but [we engaged with him where it made sense to so] that it felt authentic.” Whyte explains.

For example, Whyte cites the radio chatter throughout the early mission we play as a particular part of the script that was informed by Godlington’s experience, to the point that now the person Ryan Marks is in communication with during this portion of the game is voiced by Godlington himself. His input was also vital in addressing some common gripes of action film fans: if you’re a trained SAS soldier and a gun-toting baddie enters the room, why wouldn’t you just disarm them?

“[Kevin] showed our mocap director seven different ways that he can disarm someone with a gun, some of which were quite scary!” Whyte tells us, before explaining how Godlington provided direction to the actress playing one of your main adversaries, Kayla, how she should move in order to signify to a highly trained operative that attempting to disarm her would be incredibly ill-advised.

As Ryan Marks’ estranged family comes together in the wake of tragedy, we see first-hand what happens to those that attempt to mess with her. You’ll be able to find out yourself on 28 May.