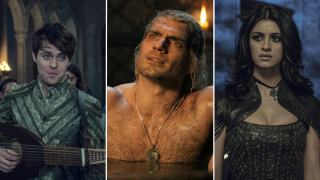 There's a song stuck in your head, a show playing in the background, and you're reading a book based in the same universe – it's official, you have The Witcher fever, and it's spreading. The hit Netflix series defied expectations by quickly becoming one of the most watched shows of 2019 just days before the year expired. And just like when The Witcher 3: Wild Hunt inspired a new wave of fans to pick up Andrzej Sapkowski's novels about Geralt of Rivia, the TV show has done the same.

But CD Projekt Red's game series is considered non-canonical, with stories and adventures that take place after The Lady in the Lake, the final novel in Geralt's saga. There are certainly side quests and missions that reference Sapkowski's stories (including "The Last Wish" mission in The Witcher 3), but much of Geralt's story is independent from what the novels provide. The Netflix series, with showrunner Lauren Hissrich at the helm, has attempted a more loyal adaptation of the original books – but there are still some major changes.

As GamesRadar+ previously reported in our beginner's guide to The Witcher books, The Last Wish is the first novel you should read if you're starting the series (it's back on the bestseller list, by the way). But picking up the book means you'll inevitably also pick up on the differences between the show and its source material. While The Witcher series strays from the sacred Sapkowski text quite often – like with the backstory of Fringilla the sorceress, the events in the Brokilon Forest, the fall of Cintra, the Battle of Sodden, and Nilfgaard in general – there are a few key changes that you should be aware of...

Warning! There are spoilers ahead. Don't send a kikimora our way.

In The Witcher Netflix series, the storylines can get a little confusing, and for good reason: it's actually three separate timelines unfolding simultaneously. You can read our deep-dive into the Witcher timeline here, and Netflix also recently dropped an official timeline on their Twitter account that helps straighten things out.

We don't meet Ciri until the short story collection Sword of Destiny, much of which is cut from the show. After Sword of Destiny, the books are full length and pan out chronologically, with Geralt and Ciri's story as the central focus. The Witcher's showrunner Lauren Hissrich has spoken about the changes made for the show, posting on Twitter: "To adapt the short stories that were important to world-building, and then to sequentially adapt Geralt and Ciri's multiple meetings in [Sword of Destiny] meant that we wouldn't introduce Ciri until (at the earliest) season two."

In the books, our modern understanding of race isn't mentioned, but the existence of prejudice in the universe is all too real. However, whiteness is implied, as the novel's European roots basically makes every character canonically white. As PCGamer has previously reported, The Witcher 3 came under fire for a woeful lack of diversity. CD Project Red member Travis Currit, who was part of the team tasked with translating The Witcher 3 to English, "suggested that for those living in more racially diverse areas, the lack of representation feels far more pronounced. He went on to say that [...]Poland is relatively 'homogeneous' in terms of race."

But the Netflix series is entirely different. When showrunner Lauren Hissrich tweeted out a picture of the production team back in 2018, your prototypical Very Much Online controversy erupted over the racially diverse representation. According to ComicBook.com, Hissirch was quick to respond, pointing out that while she had no plans to "deviate from the books' races and cultures" the show wouldn't be ethnically homogeneous. And it wasn't. Triss and Yen are both played by women of color, Fringilla is portrayed by a British-Zimbabwean actress, and Black men were cast for the mage Istredd and Queen Calanthe's royal guard leader.

Both Ciri and her mother Pavetta's powers are apparent from early on in The Witcher series – they are clearly unaware of their own strength and seem helpless to control it, especially when under duress. In episode four, "Of Banquets, Bastards, and Burials," we see Pavetta almost destroy an entire room of people in anger. This echoes a scene from episode one, "The End's Beginning," when an angry Ciri shakes a room with her rage. We learn that Ciri has inherited her mother's gift, and that Nilfgaard is after it, with the sketchy Fringilla the sorceress by their side.

In the novels, Ciri's powers are less obvious from the outset. She has moments where she seems to have heightened abilities, like showcasing an immunity to the magic waters of Brokilon. But it's not until The Time of Contempt, the second full-length novel in the series, that we see the chaotic strength of Ciri's powers.

Yennefer's background and the djinn

In the books, we know little about the details of Yennefer's background and her time at Aretuza, but in the show we get a chance to delve deep into all of that. Actor Anya Chalotra told Radio Times: "[That] was probably the main thing that drew me to the project." We learn of Yen's past life as a hunchback, her struggles to harness her power as a sorceress, and her penchant for disobeying or outright ignoring authority figures.

In the Netflix series, Yennefer seeks out the power of a djinn to grant her a wish that will restore her fertility, while in the novels she seeks it out simply to harness its power for her own. As a result, in both the show and the novel, Geralt makes a wish that binds the two together – but what exactly he wishes for is unclear in either, we just know that it somehow ties him to Yennefer. In The Witcher 3: Wild Hunt, a secondary quest called "The Last Wish" references the short story of the same name, with Geralt and Yennefer seeking out another djinn to break the spell between them and see if their relationship has merit without it.

In the novels, Geralt is definitely more chatty, whether it's with the denizens of the Continent or his trusty mare, Roach. Henry Cavill's Geralt, however, is a man of few words, with a low, gravelly voice that honors Geralt's voice actor, Doug Cockle. Put simply, Geralt in The Witcher series often chooses to remain quiet or grunt approvingly (or disapprovingly).

Showrunner Lauren Hissrich told Digital Spy: "Geralt speaks a lot less than I initially intended. In the books, Geralt's actually quite chatty, he talks a lot." This is largely due to Cavill's take on the white-haired witcher, as Hissrich points out: "What I found though is on screen, especially with Henry portraying him, a lot can be done just in looks and grunts. Henry's a big grunter, I mean that in the best way possible. It's kind of amazing what's accomplished in silence and that makes him that much more powerful of a character."

Dandelion is Jaskier, Jaskier is Dandelion

It's the one you've been waiting for. "Toss a Coin to your Witcher" – ever heard of it? If you haven't, it's the banger that the bard Jaskier sings for Geralt in episode 2 "Four Marks". It's spawned techno remixes, metal covers, and a mod that puts the song in the original game. Jaskier and Geralt's adventures are the main supplier of humor in The Witcher series, but Jaskier isn't in the books – at least not in the English translations.

In the novels (and in the games), he goes by the name of Dandelion. That's because Jaskier is his original Polish name in Sapkowski's books, and when translated to English the name roughly became Buttercup. The translators decided Dandelion was a better fit, and so he became known as that to both gamers and readers alike. Personally, I reckon it as good shout of the series to use his name from the original source material.

No one will judge you if you can't get enough of The Witcher, in fact, we're in the same boat. Read all about what to expected in The Witcher season 2.