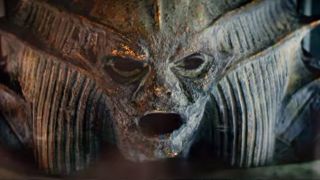 The first trailer for The Mummy is here, full of Tom Cruise action moments and one hell of a scary Mummy in the form of Sofia Boutella. You can watch it now, but GR+ was lucky enough to see it a few days early with director Alex Kurtzman, so we asked him to talk us through his favourite moments and more. Read on for The Mummy trailer breakdown with the director himself...

What do you want audiences to feel after seeing the first trailer?

People are going to make a lot of assumptions about what The Mummy is. It wasn’t that long ago that there was a Mummy movie, and they’re going to assume probably that it’s kind of what it was before.

I think that’s good, because, hopefully, the trailer will surprise everybody. And it’ll make it feel unexpected. And the movies that I tend to love and want to go see, are the ones that feel different and unexpected. The movies whose personalities scream at me in the trailer – and they say: 'This is different.'

Was it difficult to make an entertaining trailer without giving away too much?

I really have to credit Universal’s amazing marketing team with it. What I loved about the first thing that they presented, was the mystery of it. It went through a couple of iterations, but frankly, not that many.

All you want to do is ask questions. You get one chance to make a first impression. If I ask questions, you’re going to have to come back for the answer [laughs]. And I’m speaking really from the point of view of an audience.

The trailers that I remember in my life that have stuck with me, are the ones that ask questions but don’t really answer them. That makes me go, 'Now I have to see the movie to figure out what the answer is'. So I think they did an amazing job with it.

How did you film the impressive plane crash sequence?

He said, ‘Yeah, great. Well, let’s do that, but let’s also do it for real.’ I said, ‘What is that?’ He said, ‘Let’s do it in a real plane.’ That’s how I found about this place called the ‘Vomit Comet’, which is where they train astronauts. I believe the other movie that shot in the ‘Vomit Comet’ was Apollo 13.

So here’s how the ‘Vomit Comet’ works. You rocket up with the Gs of a rocket going to space. You even out, and then you drop for 22 seconds in straight freefall. In that freefall, you go weightless. When you even out again, gravity returns at twice its weight. So it’s a really intense thing for your body, physically. But what happens is, for that 22 seconds, you’re just getting crazy things – like, unbelievable things.

So what we did was, we shot this rotisserie set. We did half of it there. And we shot half of it on the plane in zero gravity.

Why did you decide include Tom Cruise's 'death'?

I think for a monster movie to work and to scare me, my lead character has to be in the kind of jeopardy that I don’t believe he or she could get out of. And if I want to take that fear to the next level, I want to believe that maybe that character will act unpredictably – like, maybe they’ll do things even they don’t want to do. If I can get the audience to believe that about Tom, then it really becomes unique.

What has The Mummy "been denied"?

And then she was potentially betrayed by someone that she loved, and it all got taken away. Her gender may or may not have had something to do with that. Because of all that, I believe that we have a character whose motives are understandable and relatable.

What's going on with the secret organisation run by Dr Jekyll?

I can’t tell you too much, but what I can tell you is that: if monsters have existed for many, many centuries – perhaps much longer than that; obviously she’s [The Mummy] 5,000 years old, so they have existed for quite some time – and there is a secret world of monsters that is underneath and we just don’t know about it or only a certain kind of person can see it; I would say that this organisation has been following those monsters for a long time. And understanding each of those monsters – for what and who they are – is the dedication and task of the organisation.

Sometimes, monsters can be used for good, and sometimes monsters have to be destroyed. It’s up to our organisation to figure it out. The problem is, the person who seems to be the face of the organisation may or may not be trustworthy, and may or may not himself be a monster. So what does that mean?