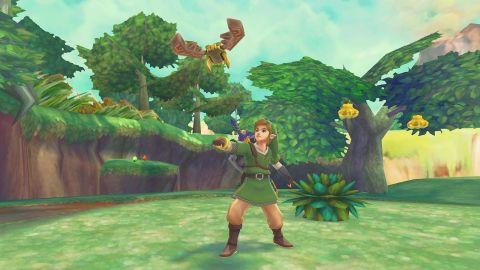 As for everything else

The story bits are best left to discover for yourself. Suffice it to say that seeing what's obviously meant to be the first game in the Zelda timeline feels quite special at times. We won't say much more, but one of the highlights is definitely the beginning of the relationship between Link and Zelda.

Learning about their history together during what might possibly be their very first incarnations retroactively gives new meaning to why Link is always willing to fight for her despite her character not being well-established in early Zelda games. It's also refreshing to see another Zelda game where Zelda doesn't really need rescuing in the traditional sense. Although we don't see her very much, it's clear she's playing her part in the quest just as much as Link is.

Is it the best Zelda ever?

Undoubtedly, Skyward Sword will be many people's new favorite Zelda, so it's understandable that some will honestly feel that it's the best Zelda ever – it's not an unreasonable position to take. The thing is, Zelda is a rare example of a series that has never had a serious misstep to tarnish its record. Every Zelda is someone's favorite Zelda, and there's a legitimate argument for why each Zelda is the "best" Zelda.

The question is: is Skyward Sword objectively superior to its predecessors? No, it isn't. But it does live up to the Zelda legacy, and that's enough to make it superior to most other non-Zelda games.

Darksiders? Yes. Darksiders is a great take on an M-rated, Zelda-inspired game, but nothing beats the real thing. Darksiders is still worth playing if you're a Zelda fan who'd like to see something a little darker and more Zelda-meets-God-of-War, but it's not in the same league.

A perfectly balanced mix of innovation and classic Zelda gameplay, Skyward Sword truly lives up to the Zelda legacy of excellence and offers the most variety of any Zelda game to date. Its swordplay and puzzles are some of the best in the series, and seeing Link and Zelda's first story chronologically is a treat for longtime fans.