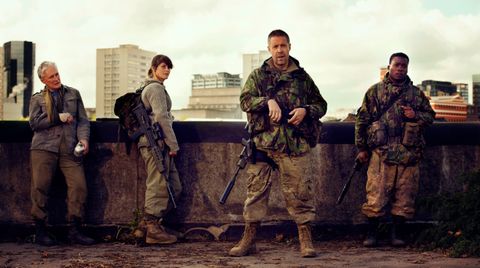 The focus is a kid who might eat your face if crossed, yet The Girl with all the Gifts summons sympathy for Sennia Nanua’s Melanie. Banged up and fed grubs in military camp, she’s one of several kids viewed with clashing opinions by adults.

Even this far into zombies’ screen evolution, McCarthy brings fresh ferocity to his ‘Hungries’, as they’re called here. Their guttural, chattering mannerisms rattle the nerves. A containment break-out scene, meanwhile, truly chills and thrills: in a miracle of low-budget filmmaking, the flesh-ripping action erupts like a riot between Aliens and Saving Private Ryan.

As Justineau, Caldwell, Parks, fellow soldiers and a muzzled Mel survive and flee across country to a safe beacon, McCarthy balances threat, thematic concerns and post-apocalypse context with care. The ravaged Britain (alas, poor Pret…) depicted lends big-screen punch to scorched Brit-turf familiar from TV classics such as The Day of the Triffids. Later, a feral encounter with a young Hungry gang makes Lord of the Flies look like The Goonies.

Either way, the leads embody each position well: Considine weaponises his perma-frown, Arterton emotes and Close gamely embraces genre fare as an ambiguous scientist with Alien-vintage Veronica Cartwright hair. But McCarthy’s stealth weapon, in more ways than one, is Nanua, who toggles between recognisable pre-teen behaviour, unusual appetites and hints of something more – a preternatural intelligence working behind the eyes…

The Girl With All the Gifts