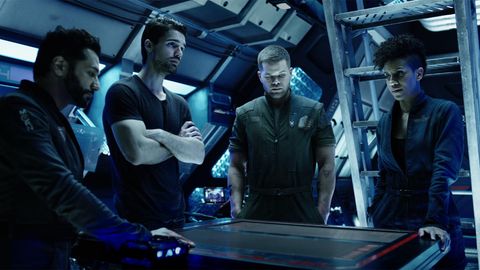 Safe and Doors & Corners get season 2 off to a brilliant start, bringing the threat of war to the forefront and making the stakes crystal clear.

In The Expanse, space isn’t glamorous. In fact, space kind of sucks because it’s doing its best to kill you. And if it doesn’t, someone next to you in space probably will because human nature doesn’t change just because the scenery has. One scene in Doors & Corners, the second half of the double-episode premiere of season 2, sums this philosophy up perfectly: the Rocinante getting shot full of holes.

Quick reminder about how we got here: scientists on a space station called Phoebe discovered an alien life form they dubbed a “protomolecule” that absorbs biomatter to evolve and adapt to its environment. It seems somewhat likely this protomolecule was sent as an aggressive act, so scientists decide to let it do its thing and see what happens. Once they get the data from it gobbling up the staff of Phoebe, they let it loose on a Belter station called Eros, which is where our heroes from the Rocinante get involved. Data is being streamed from Eros to a hidden station out in the middle of nowhere, and Holden, Naomi, Alex, and Amos are en route to confront whatever jackhole thought sacrificing Belters was cool scientific method. There’s just one small problem: the station is protected by a stealth ship, and as beefy as the Roci is, it’s no match for that kind of fight. But they’re going anyway, because it’s the right thing to do.

Alex is a hell of a pilot who’s run through a bunch of simulations about how to not get blown to bits, but there’s just no avoiding the fact that they’re going to take hits. In another show, this would lead to yelling about shields and actors convincingly throwing themselves side to side to simulate impact. But this is The Expanse. There are no shields. The Rocinante is, essentially, a car in space. And when the stealth ship starts firing, holes start appearing in the hull. The crew has already vented their oxygen and donned space suits, because they knew this was coming and they’re not stupid enough to suffocate in the middle of a dogfight. They stay strapped in their chairs, manning their stations, hanging on for dear life and praying to god that the very real bullets slicing through the room don’t come their way. Their survival will be as much a matter of dumb luck as it will skill and planning. Hey, welcome to space - did we mention it kind of sucks out here?

The crew of the Roci isn’t taking on the mystery station alone, though - Fred Johnson and 50 fighters from the OPA - with Miller in tow - are along for the ride, waiting to breach the station and take on whoever’s running these experiments. We hear them talk about “breach pods” and it sounds in keeping with Johnson’s military background, and then you see the pods are FedEx containers. For when you absolutely, positively, have to breach a station overnight, I guess. And when the Roci can’t maneuver fast enough to block the stealth ship - because Amos is hanging onto the outside trying to fix something - one of the pods gets blown to shrapnel. Poof, gone. Space isn’t sexy. Space kind of sucks.

And yet there are still people willing to fight and die for their sucky life in space. Gunnery sergeant Bobbie Draper is positively spoiling for a war with Earth because she feels robbed of her chance to see a blue sky over Mars. Mars wasn’t overly present last season; it was referenced as a military threat, but that was about it. Now, through Bobbi, we see just how much some Martians really, truly hate Earthers. It doesn’t matter that they originally all came from the same place, now there are ‘real’ Martians who’ll judge you by your bone density and how much your family sacrificed to help to make the terraforming of the red planet a reality. Martians are passionate about being Martians and if given the slightest excuse, they’ll gladly take out any Earther in range. We’ve been told that we’re one bad decision away from all-out war between Earth and Mars, and now we finally see why.

We also get to see the crew of the Rocinante fully accept each other and acting as a unit. Keep in mind, they were just co-workers who ended up on a broken shuttle together, but now they’re a team. Even Miller has, quite literally, earned a place at their odd little table, despite the fact that he’s cynical as hell and Amos tried to kill him. Quick shout out to Amos, by the way, as the most honest and uncomplicated character in the entire show. Ok, sure, he does end up killing or nearly killing people a lot, but it’s always for a good reason and he’s always ready to deal with the repercussions. His forthrightness is really quite refreshing, given all the duplicity going on around him. Man, I love Amos. He’s the polar opposite of Chrisjen, who tells the truth largely by accident and is, despite good intentions, a fairly terrible person. Last season, she betrayed one of her oldest friends to get a bit of intel, and in Doors & Corners, she arranges for the destruction of a Martian station just to make her political life easier. She does terrible things and yet, it’s clear, is one of the good guys. Man, I love Chrisjen.

This is what makes The Expanse such magnificent science fiction; it’s not trying to seduce you with the promise of a better future, it’s laying bare the fact humans are going to do what humans do. They’ll take advantage of the weak, they’ll bear grudges, they’ll use each other for political ends. In Safe and Doors & Corners, we see the same kind of behavior we see out our window right now, but there’s also an undeniable undercurrent of hope and righteousness. But even that isn’t out of nobility - Miller isn’t looking for the forces running the experiment to bring them to justice, he just wants revenge for Julie’s death. Back on Earth, Chrisjen is pulling strings as much to prevent war as to save her own skin. Alex feels guilty for everyone they left behind on Eros, Amos just goes wherever Naomi says… these aren’t saints and heroes, they’re just people doing what they can to be able to live with themselves and not die horribly. Because space kind of sucks, but maybe they can do this one thing, you know?

I wasn’t sure that season 2 could stand shoulder to shoulder with season 1’s mystery and political intrigue, but it’s clear now season 1 was just doing the legwork to get us here. Season 1 introduced the players, and now it’s time for the actual game to begin. Safe and Doors & Corners are smart and spectacular science fiction; hurry up and get in on The Expanse if you’re not already.

Safe and Doors & Corners get season 2 off to a brilliant start, bringing the threat of war to the forefront and making the stakes crystal clear.