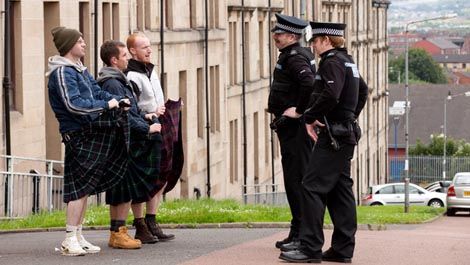 The Glasgow tourist office must be getting fed up with Ken Loach.

From My Name Is Joe to Sweet Sixteen and Ae Fond Kiss , his films have hardly shown the brighter side of the Scottish city. Once again penned by Paul Laverty (their tenth feature collaboration), The Angels’ Share may be billed as a bittersweet comedy but it’s hardly going to encourage you to head there for a Saturday night’s drinking.

An early episode where delinquent protagonist Robbie (Paul Brannigan) is forced to confront a young man he savagely beat in a street brawl for no other reason than he was high on cocaine is one of the most visceral, shocking scenes Loach has ever filmed.

Sentenced to community service, Robbie only finds redemption when his supervisor Harry (John Henshaw) introduces him to the pleasures of whisky-tasting.

Robbie soon learns the meaning of the film’s title – the tiny amount of alcohol that evaporates during the ageing process. It’s also a metaphor for the small percentage of those in Robbie’s world that escape the cycle of poverty and violence – a prospect the plot’s second half hinges on.

Via an almost Ealing comedy-style turn of events, Robbie and fellow offenders Albert (Gary Maitland), Rhino (William Ruane) and Mo (Jasmin Riggins) set out on a good-natured whisky heist that might just set them up for life.

The transition from the earlier, harder-hitting scenes is seamless, while the cast is superb (not least TF writer Tom Dawson in a silent-yet-deadly cameo in the crucial auction scene).

Brannigan makes a potentially unlikeable character sympathetic, while Ruane and Maitland provide much-needed comic relief. And that should be remembered. For all its bleak edges, The Angels’ Share warms like a sip of the good stuff.