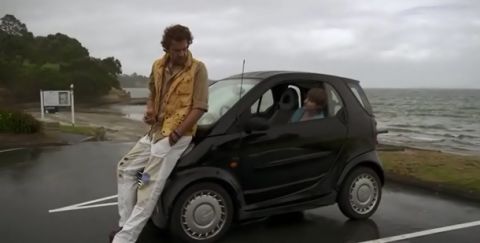 THE ONE WHERE Gaia is introduced to the pantheon of Gods, Anders gets a girlfriend, Thor comes to town and Axl has a sidekick to rescue and some roast chicken to deliver.

VERDICT The Almighty Johnsons really is going from strength to strength; it has been consistently excellent all season long and this is another top notch, five star offering. We’re in serious danger of running out of superlatives here.

This week’s episode begins seconds after the end of last week’s and picks up with Gaia, Bryn and Axl on the beach. Gaia’s initial roll around in the sand laughing reaction to Axl and Bryn’s explanations suggests she don’t really believe them and comes across as a perfectly normal response to what they have to say.
That she eventually does a runner is slightly telegraphed and not unexpected at all. We’re all set for another “Find Gaia” episode and being sidestepped by Gaia actually deciding to try to find out more rather than just bug out is a pleasant bit of misdirection. Mike’s eventual conversation with Gaia is a really moving and heart-warming explanation; Gaia’s eventual acceptance is so well played by both actors and her later scenes with the wider cast are also high points in the episode. It’s interesting to see some of the different characters take on being a god, and their feelings about what they are and what it means to them.

Meanwhile at the pub: after Anders and Helen got to know each other in the toilet stall in the last episode they are properly introduced this week. There’s a mix of alarm bells and apathy from Ty about the prophecy concerning any relationship the two have. Olaf’s cryptic “Apples” advice is as amusing and useless as ever. Anders and Helen do come across as perfect for each other; they do make a good looking couple. Ty even comments about how nice Anders is being to her and Helen does seem to fit with the rest of the Gods pretty well. But with all the doom hanging over them we wonder how comfy they’ll get and just how long they’ll have until disaster comes calling.

Thor’s arrival is as memorable as we hoped, he’s the kind of character that you could soon get tired of, but used sparingly like this he’s an absolutely fantastic addition. The through line of antagonism between Bryn and Thor about how many giants Thor’s killed and the hammer-wielding God’s constant suspicion of all things relating to giants in general – and to Bryn in particular – is a constant comedy highlight of the episode.

The resolution to the Eggther-kidnapping-Zeb plot is as mad cap as only this show can do with a Norse God stand-off which soon descends into hilarious mayhem. Zeb gets his moment to shine as he talks a desperate Eggther down. It’s nice to see Zeb getting to do more than just be the comedy sidekick now and then. Eggther is also worthy of note, Oliver Driver brings far more to the role than the simple “heavy of the week” the character could have been. (More on this below)

After being discarded as useless by Anders last week the branch from Yggdrasil is back in the spotlight as Michele steals it. We know something happened to her when she healed Axl two episodes back and here she’s obviously interested in finding out more. That she uses the branch to heal Mike’s injured back with ease means she seems to know how to control the branch by episode’s end and we wonder what else she might coax the branch to do.

Gaia’s rant at Axl at the end of this week’s episode is completely understandable; she’s had her whole world turned upside down and her destiny is laid out before her whether she likes it or not. We expected this plot to be carried through to this week and once again this show hits us with a perfect curve ball by having Gaia kidnapped right under Axl’s nose. It looks like the whole Gaia thing is going to get a lot more complicated than we thought. Last week there was a bit of fear that having Gaia be The Frigg would be too easy, but it seems this show isn’t going to make it half as straightforward as we feared.

The episode is full of great ensemble scenes with everyone on hand to discuss the situation. There’s lots of great bickering and Anders manages to piss everyone off; he seems to have come back from his quest in a very antagonistic mood; we wonder if his new romance will lighten him up or make things worse. It’s still nice to see the brothers fighting and arguing a little more, things have been very polite between them of late and Anders is certainly a welcome voice of dissent in proceedings.

Overall this is another fantastic episode, full of drama and action; from moments of quiet emotion to laugh out loud comedy, the show has it all. There are very few other series on TV at the moment that are as consistently good as this. This show deserves to be far more well-known and seen by far more people. Anyone reading this should pimp it out to their friends and family. Tell ’em we sent you.

BEST GOD Derrick (Thor) – The Almighty Johnsons’ bat’s-arse crazy, goat-farming version of Thor. Any episode he’s in he’s the best thing about it by far. He’s no Chris Hemsworth but we’ll have this guy in our corner any day.

AVENGERS ASSEMBLE, KIWI-STYLE This episode originally aired in New Zealand the week after The Avengers film started showing in cinemas. The trailer for the episode used “Avengers Assemble, Kiwi-Style” as a tagline and highlighted the Thor connection.

MISSING GOD No Loki again this week, but there was so much going he wasn’t really missed. Sorry Loki.

COMEDY DUO This week’s episode is full of great characters playing off against each other in amusing ways. As mentioned above Bryn and Thor’s giant-killer bickering was a source of much comedy, but the prize has to go to Zeb and Eggther. The montage of kidnapper and kidnappee slowly warming to each other is priceless and the parting promise to “Friend” each other on Facebook is the perfect end to this little relationship.

FORCED PERSPECTIVE Eggther the giant actor Oliver Driver might be 6’6” but the show isn’t above nicking a few forced perspective tricks from that other well know New Zealand fantasy Lord Of The Rings and using them to great size enhancing effect.

Zeb: “I thought you wanted him to bring Gaia as well.”

The Almighty Johnsons airs Mondays at 10pm on SyFy

• Read our other The Almighty Johnsons season 2 reviews