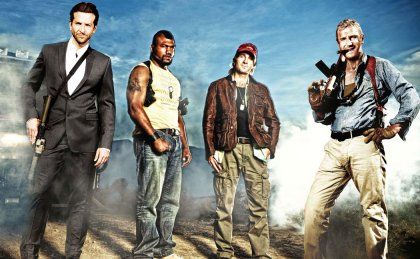 The A-Team review - There are a few ways to go when transferring a slice of TV nostalgia to the big screen. You can re-visit with an arched eyebrow (Bewitched, Starsky & Hutch, The Brady Bunch), turn up the volume (Charlie’s Angels, Mission: Impossible, The Fugitive), or even just play it straight (Miami Vice, The X-Files, Star Trek).

He’s taken ’80s crime-fighting hit The A-Team and all but drowned it in its own testosterone. His movie re-do is so soaked in the stuff that the original’s manliness positively shrivels in its glistening, rippling presence.

The A-Team 2010 is so besotted with muscle power – both human and artillery – that the outrageously cut and buffed Bradley Cooper isn’t even the gang’s main brawn.

No, the Hangover star is Face, the cocky one; a lean and cigar-chomping Liam Neeson is Hannibal, the one in charge; scene-snatcher Sharlto Copley (speedily building on the breakout success of District 9) is Murdock, the manic one; and Quinton ‘Rampage’ Jackson, a professional mixed-martial artist in his first movie role, is B.A. Baracus, the quartet’s de facto strongman.

Together they are the A-Team, who in their TV incarnation were four Vietnam vets framed for a crime they didn’t commit. On the run from Uncle Sam, they formed their very own black ops-style rescue outfit-for-hire.

In Carnahan’s update, our vets are of the Iraq variety, and the story is a sort-of prequel à la J.J. Abrams’ Trek, one that spells out why the famous four went renegade in the first place. It’s during the setting-up section of the movie that things fall most cohesively into place.

In an extended title sequence we’re introduced to the main players and given some sense of their pre-Team backstories. Then they pal up and turn into something not unlike Marvel superheroes, defying death and gravity as they head off to Baghdad to retrieve stolen U.S. currency plates.

Alas, our heroes are double-crossed, accused of both murdering their boss (Gerald McRaney’s General Morrison) and attempting to pilfer the plates themselves.

Unjustly imprisoned, they set about escaping to clear their names and find the plates with the aid of oily CIA agent Lynch (Patrick Wilson). All this while being pursued by Charisa Sosa (token totty Jessica Biel), a Defense Department officer who happens to be Face’s former flame.

The currency plates, however, are merely a MacGuffin, a thin excuse to run the characters through the set-piece gauntlet while spouting lines like “Overkill is underrated” (the movie’s unofficial mission statement) and “It’s beyond nuts, boss!” No, dialogue isn’t The A-Team’s strongest suit.

Nor characterisation, which barely gets beyond first base. (Not actually a bad thing, given the ill-conceived, Gandhi-quoting crisis of conscience that befalls one of the guys mid-way.)

But it’s not as if Carnahan is selling his source short. The original A-Team was famously the show in which bullets sprayed in every direction, but no one ever died.

Here, people do die, but the mood is still one of gung-ho escapism. It’s the same gleeful mayhem, but on a blockbuster budget. So in the film’s signature sequence, Carnahan makes a tank fly (and with all guns blazing).

It’s a ludicrous scene, but it may just give you a smirk as wide as Cooper’s.

Alas, the second half sees the excess become, well, excessive. A surplus of villains and an overly convoluted plot will leave many wistful for the straightforward bombast of the first hour.

Carnahan strives to keep your interest locked by continually upping the action ante. But the cutting becomes so frantic, the shots so close-up that, like Michael Bay on a bad day, it’s hard to tell the bottom from the top, the good guys from the bad.

Worse still is the surprisingly shaky CGI in the no doubt spectacular-on-paper finale, a showdown that attempts to play the old three-cup magic trick with colossal shipping containers in the Port of Los Angeles.

It’s one thing to ask for suspension of disbelief, but there’s no excuse for FX this clunky in a movie this big.

Still, give the cast some credit; in the face of all the shortcomings, they exude a broad confidence that’s just shy of smugness.

If the script leans too lazily on the characters’ built-in appeal (the catchphrases, B.A.’s mohawk), at least the actors work at forging a believable group bond. Thanks to them and the first-half fits of spirited chaos, The A-Team comes together. Just.