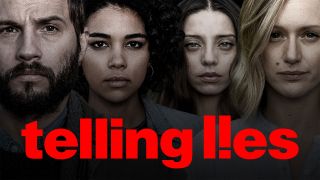 Created by Sam Barlow, who made the award-winning Her Story back in 2015, Telling Lies takes the same gameplay premise that he engineered there – in which you attempt to piece together an incident through frantic fragments of a one-sided conversation – but expands upon it to include a cluster of people, a child, and ultimately, a brand new mystery. One that I barely caught a glimpse of in my half an hour session with Barlow and the upcoming game at E3 2019. "[It's] bigger, more colourful, more messy, [and a] more human story."

Telling Lies starts with a theft. A woman rushes into her apartment armed with a stolen hard drive, upon which lies hours upon hours of footage of average people in their homes, all recorded illicitly by the NSA. Entire conversations are at your fingertips, with both parties tabbed so that you can listen in on everything that they are saying, getting two perspectives on an often intimate dialogue. From the second that this woman plugs the hard drive into her computer, as you begin to scrub through these audio recordings, you're left wondering what the circumstances were that led to this situation. Who are these people? Why have these recordings been made? How are all of these people connected?

Like Her Story, gameplay takes the form of piecing together particular key words and themes that emerge through the footage you're watching. You use the handy search mechanic to look for more references of that word or phrase, and it might just drop you into the middle of a video. You can then use an analogue-style scrub mechanic that lets you move through the footage, but still able to see what's happening around the point you're dropped in.

"I wanted to build on that feeling that we had on Her Story here with something that feels similar," explains Barlow, "where the game just says, 'Right, go off and play. Look through all these video clips'. And there are a lot [of them]. There’s hours and hours of footage. There’s all sorts of weird, wonderful little scenes that shine different lights on the characters."

But there's also a spotlight on this woman you're playing as, the one in possession of the tapes. You might physically be the one scrubbing through all of this footage, but you're playing as someone else – the thief. Regardless of what you're watching, her face is always reflected in the mock monitor screen the game exists within. She's there as a reminder that you are peering into other people's lives, and that you're not entirely alone as a player either.

Barlow informs me that if you play wearing headphones you'll be able to hear what's going on in the apartment around her too if you listen attentively enough, and those sounds may change throughout the game reflecting the passage of time. "[It] kind of allows you to live in these stories, and a lot of the stories are concerned with these characters' relationships and private lives. And through the cold abstract computer interface, it actually gives you this sense that it is much more human and organic."

"Everything has been designed so that it’s as far from just sitting back and just watching a video. Because every time you see a video, you’re leaning in and you’re trying to figure out: who are they talking to? What’s going on? What just happened? What’s about to happen? Where are they? They’re saying this thing, but do they mean it? And you’re picking up on, or hearing about, a place, or a character that you’ve never heard of before. What is that about?"

It helps that from the snippets of out of context, deliberately chosen spoiler-free videos I saw during my time with Telling Lies, it's clear that all of the characters you'll get to know throughout the game are incredibly compelling, and played by actors you recognise from elsewhere – Logan Marshall-Green (Prometheus, The Invitation), Alexandra Shipp (Dark Phoenix, X-Men: Apocalypse), Kerry Bishé (Scrubs, Narcos), Angela Sarafyan (Westworld) and Vivien Lyra Blair (Birdbox). Flashes of each of their personal lives moved across the screen, grounding these characters in the reality they have found themselves in. From parents figuring their way through a child's first loose tooth, a woman sitting in her lingerie speaking to her partner, to a couple singing the same song back and forth to each other. It's a safe kind of voyeurism, and it's totally absorbing.

"It's just so natural for us to be curious about other people’s lives. There's something about the texture of reality and documentary – even the news is delivered with grainy cell phone footage. There's no real cameras anymore covering the news, right? It's all people’s cell phones and stuff… I’m trying to use some of that texture to tell the story. It feels like an interesting way of making it come alive. But yeah, it was important to me that it doesn't feel voyeuristic – or too voyeuristic in a sleazy way."

But unlike watching an episode of Big Brother or Love Island, the story of Telling Lies is one that spans two years, so as you can imagine, looking through all the footage is going to present you with potentially very different slices of these characters' lives.

"There’s something about the fact that because it’s a lot of these conversations over camera, you’re always sat as part of that conversation when you’re watching someone else. And you switch between those two perspectives," Barlow tells me, as he considers the voyeurism inherent to Telling Lies' core structure. "You don’t have the gaze of a camera. You’re not spying on these people. So it has this middle ground where you feel like you’re part of it, and you’re close to them, and there’s an intimacy about it. It is about your curiosity listening to these people, and watching what’s going on with their lives, and trying to figure their shit out."

I for one can't wait until the game arrives and lets me prod around these people's lives. It's currently confirmed for PC and mobile platforms, but Barlow says he's "getting it on as many devices as humanly possible, so that we just pull people in".

And I think it's exactly by bringing in a bigger cast, telling a bigger story, and taking everything that made Her Story amazing, and doing it all over again