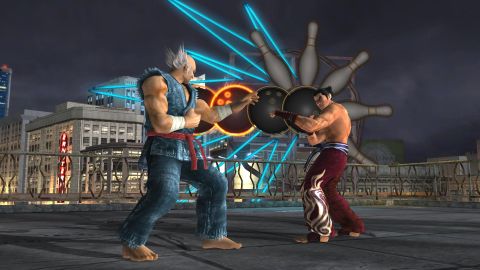 We've already played this game. Sort of. When it was released on the PSP last year. But the PS3 version of Tekken 5: Dark Resurrection was worth the wait. Sure, it lacks the spiffy next-gen polish of a Virtua Fighter 5, which was actually designed for the PS3, but it's not a shabby looking game by any means. And the fact that it supports 1080p makes it even more visually appealing.

Graphics aside, the game plays pretty much the same way the series has always played: extremely well. There's nothing revolutionary about the gameplay - most people should be able to start playing almost immediately; all you need to know is that there are two punch buttons, two kick buttons, and around eight zillion ways to combine the moves that come out of them - but it's as solid as its ever been, with some tweaks that no one other than the most dedicated Tekken fans will notice.