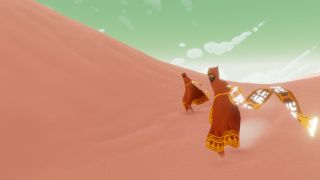 Last month, thatgamecompany - better known as the creator of Journey - abruptly released its new game, Sky, on iOS. Today, the studio followed up with a surprise iOS release of Journey, as co-founder Jenova Chen announced on Twitter.

Journey the older sister of Sky is out on iOS today! Thanks to ⁦⁦@A_i⁩ and ⁦@SonySantaMonica⁩, three thatgamecompany games are within my pocket ready to play at all time! https://t.co/vzCZvaClmHAugust 6, 2019

If you're wondering, the third iOS game Chen was referring to is Flower. Anyway, back to Journey. You'll need iOS 12.2 or newer to play it, 1.1GB of space to install it, and $5 to buy it on the App Store. If you want to play with other people via Journey's asynchronous multiplayer, you'll also need a stable wifi connection, but you can play the whole game solo.

For those of you who somehow missed the Journey train, I'll try my best to explain why this game is utterly unmissable. Journey is fundamentally a 3D platformer, but it's not a game about challenging jumps or collecting things. It's a game quite literally about the journey, and the sights you see along the way. It's about the lovely music that accompanies those sights, and the jolly cooperation of traveling with a nameless stranger - or the quiet isolation of going it alone, depending on who you ask.

Journey is one part game to two parts audio-visual splendor, and it's presented so well that you can't put it down. It's meditative, contemplative, and truly relaxing. It was great on PS3, even better on PC, and I've no doubt it'll be great on mobile. It's currently limited to iOS, but thatgamecompany is already bringing Sky to Android, so we may see Journey come to Android as well.

For more details, check out our original Journey review from way back in 2012.