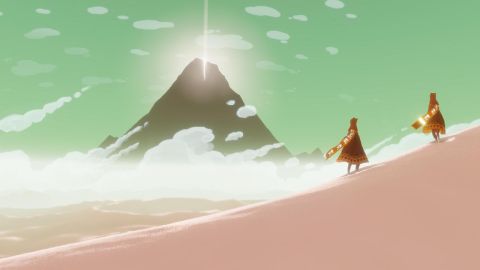 There are no gaudy explosions, no zippy one-liners, no grandiose set-pieces. And it’s all over in around two hours. But Journey is one of the longest games we’ve played in quite a while. And that’s a rare compliment.

Journey is long because it’s long-lasting. It’s a game that we will remember for years to come – one whose themes and imagery have already embedded themselves deep in our psyche. We remember, more than anything, how we felt after completing each chapter, and we recall (with fondness, melancholy and joy) our sense of accomplishment at finishing this singular quest.

In short, Journey succeeds because it takes so many of the conventions of contemporary games and turns them on their heads.

Journey’s story is deceptively simple: It’s told with no dialogue (though we began to analyze its many symbols after we completed it). We begin as a robed humanoid creature in the middle of a rolling desert. Almost immediately we saw our objective: a shining beacon of light atop a mountain.

Thatgamecompany, Journey’s developer, is now well-known for producing titles that encourage a sense of awe and bliss through self-guided discovery. And just like Flow and Flower before it, Journey put us in the midst of wilderness and gave us just enough tools to poke and prod around it until we slowly formed an idea of how to navigate. We have a button that functions as a beacon. It takes little time to understand how useful the beacon is to unlocking the other crucial ability, that of jumping. These simple features beget even larger ones as we continued playing, since players can jump and glide only for a limited time.

By the time we navigated through Journey’s initial sections, we felt just familiar enough with its controls to play alongside another wanderer. And that’s when it happened to us: another wanderer (just one) appeared in the distance. The game’s approach to co-op gameplay is utterly unique. When another player appears – seemingly at random, and at different points in any playthrough – all we have to work with is the limited vocabulary of the game. We had no idea who that person is until we completed our Journey – there is no PSN ID indicator, nor any voice chat. Our only communication is via the beacon, or by jumping around, or however else we choose to try to reach out to our fellow wanderer. And if we choose, we can simply ignore each other and wander off in different directions. The best part: it’s almost impossible to grief your partner, because the game is designed so that the limited resources can’t be hogged or stolen from each other.

By the end of the game, we felt an amazing sense of accomplishment and – dare we say it – affectionate camaraderie for our fellow traveler. We helped each other through some tough challenges. We communicated via a language we created ourselves: a series of chirps and jumps and circling around each other. Thatgamecompany should be applauded for the incredible technical achievement of subversively giving us a warm, human connection by providing the most anonymous gameplay experience in some time.

Journey works so wonderfully because it has the courage to restrict elements that we’ve come to take for granted in other games. One can make a granular argument that it’s a game that consists of jumping and Morse Code. And while that person would be right, that person is also missing the point and playing the wrong game. The execution on these simple gameplay ideas is so exact and precise that it’s ultimately more than sufficient to keep us in its thrall up until the heart-wrenching finale. Indeed, we didn’t need anything other than that which was provided for our Journey. It also helps that the soundtrack truly augments both the emotion and, at points, the tension of the experience. It’s an outstanding score.

Caveats here are minor. Journey is a calming, relaxing game, so you might not want to start it late at night, lest you find yourself a tad too hypnotized and dozing off with controller in-hand. However, by the time you stumble upon a co-op partner, you’ll have the pressure of co-dependency to keep you engaged and alert. Also, like other Thatgamecompany titles, it’s an experience that’s at its best in the first playthrough, because the magic comes through discovery. We plan to play it again, but armed with the knowledge of what’s to come, it won’t be quite the same. Don’t let that stop you from playing it, though. There’s new magic to be discovered as we find new partners to join us on this trip.

Journey is an unforgettable experience. Even when the details fade, the emotions that it evoked will stay with us for years. The pacing, the sense of scale, and the feeling of awe are all razor sharp. It all merged together as we discovered another player in our traversal. We won’t play another game like it, and frankly, we won’t need to, either. If you’re a gamer, it’s an outstanding reminder of why love this medium. Do not hesitate to embark.