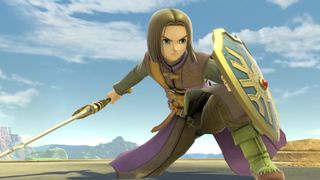 Dragon Quest’s Hero is the latest character to join Super Smash Bros. Ultimate’s bustling roster and can be unlocked via Challenger Pack 2, which includes Dragon Quest XI’s protagonist and his stage Yggdrasil’s Altar. Hero is an incredibly strong fighter who uses both magic and empowered sword swings to effortlessly slice and dice his way to victory. This deadly fighter can also barrage opponents with spells from his Command Selection ability, inflicting them with immobilising status effects that render them helpless to Hero’s empowered physical attacks. If you’re looking for a fighter that can dictate the flow of any battle and KO enemy brawlers with sheer style, then Hero might be the fighter you’re looking for. However, you’ll need a good understanding of his mechanics and how best to use them if you wish to truly crush your foes. Make sure you check out the tips outlined below to ensure you get the most out of Smash Bros. Ultimate’s Hero.

How to unlock Hero in Super Smash Bros. Ultimate

If you want to add Dragon Quest’s Hero to your Smash Ultimate roster, you’ll need to buy The Hero Challenger Pack from the Nintendo eShop. You can purchase individual Challenger Pack’s for $5.99/£5.39 each, but if you’re aiming to get every DLC character and wish to save $5, then we recommend purchasing the Fighter Pass for $24.99/£22.49. Once you’ve purchased either the Hero Challenger Pack or Fighter Pass, simply wait for the download to complete and boot up your game to receive all your Dragon Quest goodies.

How to make the most of Hero’s abilities

MP (Passive)
Hero’s special moves require varying amounts of MP and you’ll need to ensure this bar is constantly kept topped up during a fight, especially if you wish to make use of Hero’s deadly commands. The MP bar can be replenished by attacking opponents or waiting until the bar regenerates. Although the MP gauge fills over time, you’ll want to try and fill it as quickly as possible in order to maximise your overall damage output. Try to play aggressively and weave in a few neutrals alongside your high-damage special moves to keep the MP bar constantly ticking over.

Frizz/Frizzle/Kafrizz (Neutral Special)
This fiery attack unleashes fireballs directly in front of Hero. The fireballs grow stronger the longer you charge them, so try to constantly barrage your foes with a hail molten projectiles whenever they try to get back on the stage. Hero’s neutral special is also great at forcing your enemy to play defensively, making it incredibly easy to punish those who try to turtle under their shield. When your foe puts up their shield, simply rush them down and grapple them for some free damage.

Zap/Zapple/Kazap (Side Special)
Hero imbues his sword with lightning before unleashing deadly lightning-based attacks that can launch foes. This attack grows stronger the longer you charge it, but the charge can not be stored. Releasing the side special early will send out a small lightning bolt from the tip of Hero’s sword, while the second charge sends out a horizontal bolt that covers a wide distance. Lastly, the fully charged attack sees Hero imbue his sword with lightning before unleashing a deadly spin that sends all those caught within it flying. Look for opportunities where you can use the move’s fully charged state, as you’ll often be able to KO your opponent before they can react.

Woosh/Swoosh/Kaswoosh (Up Special)
Woosh summons a tornado that lifts Hero upwards. Hero’s empowered Woosh offers some fantastic recovery options and can even disrupt your foes if they happen to get caught beneath the tornado. However, the charged nature of this special makes it easy for your enemy to intercept it with projectiles and attacks. While Kaswoosh may cover a greater distance, sometimes it's best to use your regular jumps and faster Woosh/Swoosh to get back onto the stage, especially if you’re playing against a poke heavy fighter.

Command Selection (Down Special)
Hero’s down special opens a command window of randomly-selected spells that you can choose from. Every spell requires varying amounts of MP and you’ll need larger amounts for the more powerful abilities. These spells can empower Hero’s attacks, boost his knockback capabilities, buffs mobility, and can even deliver a self-destruct KO with Kamikaze. There’s a lot of moves to choose from and you’ll need to learn what each one does if you wish to make the most of these unique spells.

Hero’s mix of ranged spells and deadly empowered physical attacks makes him an absolute nightmare to face on the battlefield, forcing foes to play carefully if they wish to avoid an untimely demise. Your win condition is largely based around keeping your MP gauge filled at all times during the fight, so be sure to barrage your foe with your neutrals, aerials, and smash attacks to build the metre up as fast as possible. Pummeling your opponent with your empowered abilities will not only increase your damage output, it will also give you even more opportunities to KO your opponent with Command Selection’s most powerful spells. Zone your foe with fiery Kafrizz blasts and punish their shield with a deathly strikes from Zapple. By doing this, you’ll be able to rack up some decent damage and set up early-game KO opportunities with your charged side special.

If you’re struggling to land attacks against more mobile foes, a well-timed Command Selection spell can give you the tools needed to put an end to their tricky plays. This ability’s spells may be randomised, but they can often give you the power needed to turn a close fight in your favour. For example, if you’re ahead and struggling to deplete your foe’s remaining stock, then Command Selection’s Kamikaze will deliver enough damage to KO even tankiest of fighters. Meanwhile, utility-based spells like Snooze, Kacrackle Slash, Acceleratle, and Oomph can often keep you in the fight despite taking a lot of damage. While Command Selection may give Hero access to a huge amount of abilities, it does leave him open to enemy attacks, so try to always ready up a spell whenever you’ve successfully launched your foe. When fighting offstage, be sure to spike your opponent with Hero’s forward aerial and use Woosh’s empowered state to effortlessly get back on the arena. Doing this will often reward you with some incredibly easy kills, especially against those that lack decent forms of recovery. Hero’s combination of deadly sword swings, lethal spells, overall range, and huge KO potential with Command Selection make him a fantastic choice for those looking to grab some incredibly stylish victories.