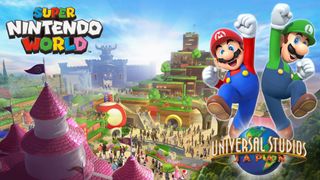 Super Nintendo World's summer launch has been officially announced, alongside the "Power Up Bands" you'll use in the park.

Nintendo released a music video giving us a glimpse of the plans for the park, as well as a new Galantis and Charli XCX song.  It's an absolute banger, and one I've personally listened to 4 times today, but you can make your own mind up on it below.

While the video gives us a glimpse of some of the things we can expect from Super Nintendo World, more info came from Bloomberg journalist Kurumi Mori. They were at a presentation at Universal Studios Japan, where they gave more details about what to expect from the park. The main takeaway is that the Power Up Band, which connects to a smartphone app, will "make you feel like part of the game world".

Super Nintendo World will use tech + smartphone app⚡ Wearable wrist bands called the "Power Up Band" will make you feel like you're part of the game world 🎮 You can collect digital coins and compete with others #SuperNintendoWorld #MarioKart pic.twitter.com/ltloaNqCCEJanuary 14, 2020

The other big reveal from Mori is that there will be a Super Mario Kart race for lucky attendees to take part, although we're yet to hear if it will have a real life Blue Shell (thankfully). While there's no exact date yet, this feels like the most we've learned about the park since it was first announced. There were photos from the park's construction which came to light last year, but that had been pretty much it.

Don't worry if a trip to Osaka is going to be a bit too pricey, there are also plans to launch Super Nintendo World at Universal Studios Hollywood, Orlando, and Singapore, at unspecified times in the future.

While we wait to see what Super Nintendo World looks like, here's the best Nintendo Switch games.