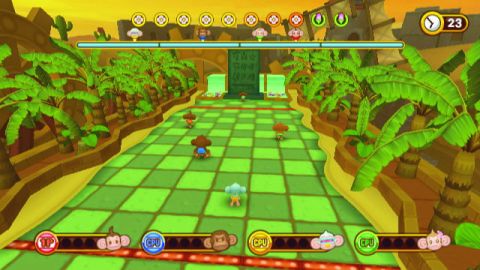 The traditional Monkey Ball camera is at its least helpful in Step & Roll: the close-up viewpoint and steadfast refusal to switch angles when you need to change direction until – cheers, Monkey Ball – it flips around mid-maneuver and leaves you completely disoriented. Every issue we’ve experienced with it in the past is compounded when you’re trying to coax at least a small measure of predictability from a control system that offers no feedback.

The game’s designers must be aware of this, as many levels have small rails at the edges of the difficult bits, or even deep grooves in the middle where you can position the ball and guide it most of the way simply by leaning forwards. Lame, it is.

It says a lot about the failure of the balance board controls when reverting to the plain old remote suddenly makes it 100% more playable. That’s the same remote that was 100% less precise than an analogue stick in Banana Blitz.

The game knows if you’ve given up struggling with the board in an attempt to remote-trundle through its wide open courses with no trouble at all, so it sticks a load of statues in the middle of the path to give you something to steer around. It strikes us as more than a little bit sad that a game once famed for its fiendish level design has started serving up flat surfaces littered with identical blocks.

Depending on your choice of control set-up, Step & Roll is either a hugely frustrating balance board game or a rather dull experience with the remote. A few levels did manage to get the blend right, offering a sufficient degree of challenge without making us want to smash something, but those are the exceptions. After a while we just wanted the whole thing to end.

The multiplayer side of things isn’t a great deal better. The Step & Roll implementation of Monkey Target isn’t as good as the original GameCube one, and few of the minigames are of the kind of standard you’d find in Wii Play or Wii Fit Plus. Also, there’s no Monkey Bowling. That was always our favourite one, and we’ve no idea why it would be deemed surplus to requirements in a minigame collection of such thoroughly pedestrian quality. It’s a much poorer game in every respect thanthe original, which is a decade old.