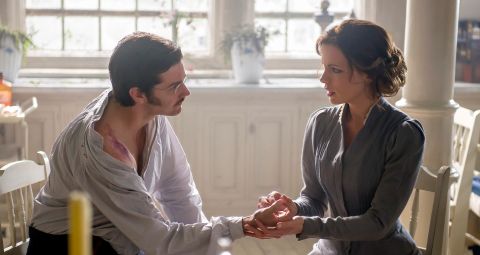 This is not, we’d wager, the film its director intended. Yet it’s worth watching, if only to see Caine and Kingsley together for the first time in 25 years.

You don’t have to be mad to work here...

Trainee shrink Newgate certainly finds troubled minds aplenty at the titular loony bin, an isolated Gothic pile whose “residents”, he discovers, have imprisoned their wardens and become their own keepers. Yet even with Sir Ben Kingsley’s Silas Lamb ruling a roost that includes hysteric Eliza (Kate Beckinsale) and a man who thinks he’s a horse, Anderson’s adap never goes ‘full retard’. Like incarcerated head doctor Benjamin Salt (Michael Caine), the story’s anarchic spirit remains under lock and key, vainly waiting for a Gilliam or Burton to let it loose.

What Anderson serves up instead is more of a period romance, Newgate quickly falling under the spell of Eliza and risking all to liberate her from crazy Lamb’s clutches. But the man behind The Machinist also makes time for some fleeting psychiatric theorising. It’s hardly The Moral Maze, yet it does suggest the director and writer Joe Gangemi gave some thought to the issues Poe raised and sought to incorporate them, at least before succumbing to studio pressure and turning in something more conventionally macabre.

The increasingly ubiquitous Kingsley gets all the best lines here as Lamb, but even he seems restrained, caught as he is between villain of the piece and the clinical iconoclast Lamb considers himself to be. Diagnosis? A missed opportunity, but not without the odd entertaining manic episode.

This is not, we’d wager, the film its director intended. Yet it’s worth watching, if only to see Caine and Kingsley together for the first time in 25 years.