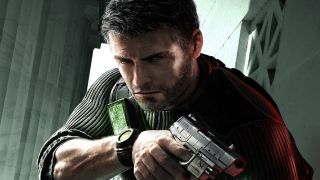 A new game in the Splinter Cell series could finally be coming... to Oculus VR headsets. The Facebook-owned virtual reality company has reportedly signed deals with Ubisoft to bring exclusive versions of Splinter Cell and Assassin's Creed to Oculus. While Assassin's Creed has been going strong for more than a decade with appearances on scads of modern platforms, it would be the first new project for the Tom Clancy-verse stealth franchise since 2013's Splinter Cell: Blacklist.

Some VR games like Budget Cuts have already made a compelling example of how to handle stealth in virtual reality, which could give us some idea of what to expect from the new Splinter Cell project. Whatever it is, hopefully Ubisoft brings back Michael Ironside to do the voicework - he clearly showed he was up to it in that Ghost Recon Wildlands cameo.

According to The Information, Oculus is looking to lock down deals with major video game franchises to help drive interest in its range of VR headsets and encourage current users to spend more time with them. The company's first headset, Oculus Rift, officially went on sale to the public in 2016 but still hasn't achieved widespread adoption. However, the same report indicates that the new Oculus Quest headset - which is wireless and works on its own without the need for a separate PC or console - has blown past Oculus' sales projections since launching in May.

Here's how a Facebook spokesperson responded when I asked them if the company could confirm or deny the report: “The response to Oculus Quest and Rift S gaming have been incredible. We cannot comment on specific partnerships, but we will continue to focus on expanding our library and reaching broader gaming audiences for years to come.”

As cagey as you'd expect for an official response to this kind of report, but at least it isn't a flat out denial. I wonder if this is what Ubisoft CEO Yves Guillmeot was talking about when he finally addressed the status of the Splinter Cell franchise earlier this year?

“Now there are some things and some people that are now looking at the brand; taking care of the brand," Guillemot said. "At one point you will see something but I can’t say more than that."

The new Splinter Cell could be a ways off, but you can start saving money for it now with our early Amazon Prime day game deals.