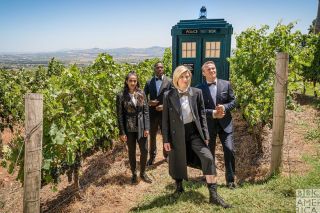 Exactly 56 years to the day since Doctor Who first graced our television sets, the BBC has released a new teaser trailer for the second series starring Jodie Whittaker as the Thirteenth Doctor – the 12th since the reboot in 2005 and 38th(!) overall.

Along with glimpses of some returning characters and upcoming guests – including Stephen Fry, Sir Lenny Henry, and Goran Višnjić – the trailer shows us a number of curious sights, including a Nazi-occupied 1943 Paris and the reprise of an old favourite antagonist: a rusty-looking Cyberman. Just as he comes into view, the Doctor says, ominously: "Something's coming for me... I can feel it."

Sadly, there was no further info teased in the video description as all the blurb says is: "Doctor Who. Coming early 2020". Yup, that's it. Yup, I'm disappointed, too.

As Bradley reported yesterday, Doctor Who is looking to up the ante for its big return. According to showrunner Chris Chibnall, the season 12 premiere could be one of the biggest the show has ever done – and has also teased what else we can expect from the new series.

While the season 12 premiere doesn’t yet have a release date, Chibnall was also keen to stress that the show will “continue the ongoing journey” with the Thirteenth Doctor, played by a returning Jodie Whittaker. “We want to do big action-packed emotional, scary, funny stories and I think what we want to go up a level from last year,” he says.