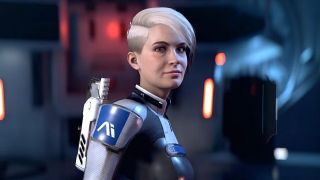 Did you know one of your first squad mates in Mass Effect: Andromeda is almost definitely a close relative of the Illusive Man, AKA one of the biggest bads from the original trilogy? Yep, Andromeda is still hiding plenty of secrets two months away from its release date. Read on for some more details you may have missed from the hype cycle.

Cora may be related to the Illusive Man

There's more to Cora Harper, your hardcore biotic operative squad mate (and potential romantic interest) than we first thought. She shares her surname with Jack Harper, aka the Illusive Man. He was the leader of the human-first organization that - aside from a temporary alliance - Shepard fought in the original Mass Effect trilogy. There's no way her name is a coincidence, which makes the next question what it means for her character.

Is Cora a mole planted in the Andromeda Initiative to advance Cerberus' xenophobic agenda beyond the Milky Way? That would be a bit obvious, given the name, so does she actually hate what her father/uncle/second cousin twice removed became and want to make sure his ideals remain behind? Or did she flee to Andromeda to get away from his legacy all together?

Multiplayer has PvE and but no dedicated servers

@tibermoon @Tinkham11 crossplay not in the current plans, sorry. and mp is peer to peer (same as me3)January 27, 2017

Just like Mass Effect 3, there will be at least one multiplayer mode that's focused on PvE - teaming up with player-controlled teammates to fight computer-controlled enemies. And again like Mass Effect 3, it will all be done with peer-to-peer connections. Dedicated servers tend to be more stable since they don't rely on a single player's internet connection, but they're less essential with lower player counts.

That new alien is called Jaal

Let us introduce you to the angara. pic.twitter.com/PnawwxaY5xJanuary 26, 2017

Enough with all these old Milky Way species, time to meet some Andromedans. The angarans appear to be a prominent species in the new-to-us galaxy and Jaal is the one we've seen the most of so far. We don't know whether he can join your squad yet, but him getting his own Funko Pop collectible figure is definitely a good sign.

You can keep playing after finishing the main campaign

@DesertHRO yes :) hey @tibermoon do you have more info we can share at this time?January 29, 2017

The central story of Mass Effect: Andromeda doesn't conclude with a hard ending. BioWare won't even begin to indicate what kind of activities will be available after you Successfully Do The Thing and the credits roll, surprise surprise, but good to know that they're there.

@mikasniehaus You can customize both twins individually, and the dad will automatically resemble you (to an extent).January 30, 2017

Both Scott and Sara Ryder are putty in your hands in terms of visual tweaks, even though you can only play as one of them. Once you get them how you like them, their dear old dad Alec Ryder will automatically resemble the twins "to an extent". I'm already looking forward to people breaking the character creation system to make monstrous Ryder clans.

If you use the default first name, people will actually say it

@sarahgzhang Sadly no, I'd hoped to do that but we didn't get it in. You need to use the actual default name if you want npcs to say it.January 29, 2017

Commander Shepard has a customizable first name but everybody calls him or her Shepard all the time, thanks to obvious voice acting restrictions. You can pick a custom given name for your preferred Ryder as well, but there is some incentive to leaving it as the default: other people will actually say it! Not all the time, I'm sure, but now and then. Whichever character you don't pick will remain as Sara or Scott.

@Devon_DB @mikasniehaus No. Your twin always uses the default name, so we can avoid twins and father all calling each other "Ryder."January 30, 2017

Enemies get smarter on tougher difficulty, not just stronger

@mtheety There are both behavioral and stat changes based on difficulty.January 29, 2017

Don't you hate it when harder difficulty modes just turn the same dumb enemies into bullet sponges? That won't be the case in Mass Effect: Andromeda. The original trilogy allowed for everything from super forgiving to hellishly crushing difficulties so hopefully Andromeda follows suit.