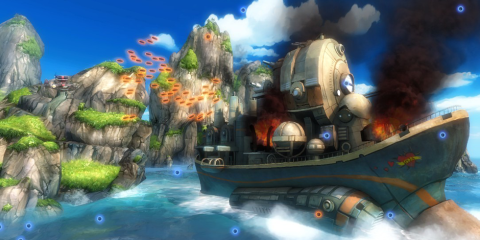 Admittedly, when we received the low-down on Sine Mora, we smirked a little. The marketing embellishments of both “diesel-punk shoot em up” and “casual friendly” seemed like a stretch. And while it’s no genre trailblazer, it’s a game that weds one of Japan’s zaniest and most creative game developers with a Western team that’s created a gameplay homage to one of the most niche genres around. Sine Mora is a shoot em up, which for the uninitiated, can range from classics like Gradius to yesteryear legends like Ikaruga. This one’s a joint collaboration between Grasshopper Manufacture and Digital Reality, and seems to send up certain elements across the space shooter genre, from the anthropomorphic animals you play as, to the dark, twisted story mode. It boasts a profoundly unique art style that not only toys with the foreground, but provides an extra layer of necessarily vigilance, as you’ll have to watch the threats popping out of the background. It also helps that composer Akira Yamaoka's score complements the tense action effectively.

The gameplay is centered around time. From the time your ship sets off, you’ll have to race against the clock to take down as many enemy crafts as possible. If you take a hit, there’s a time penalty, and you’ll lose any potential combos you’ve gained. It’s less important in story mode, but it’s absolutely key to surviving Sine Mora’s arcade mode, which starts you off with little time and a real kick in the pants to get shooting, though the game does adjust to your playstyle over time.

Time also plays into other factors, since you can tap the right trigger to momentarily reduce time to a crawl and sneak past rapidly firing laser cutters, duck a swarm of deadly glowing bullets, or quickly regain any power-ups you lost while failing to avoid a hit. As you collect both bullet power-ups (which allow for several mutations of a simple, linear firing stream), you’ll enhance your craft, and depending on what secondary fire you pick, you’ll have a limited reserve of weapons that do big damage in wide radii. And you’ll need them, because each section touts a grandiose level boss with its sights set on eating up all of your continues.

It’s key to note that the genre is well-known for its toughness and a reliance both on muscle memory and the foresight to position your craft out of the way of oncoming damage. In Sine Mora’s case, that “casual friendliness” means that you’ll get a handful more continues than if you picked a higher difficulty, when you play the campaign. When you run out of continues, you’ll have to start the whole stage over, which unfortunately means that your boosters won’t carry over and you’ll be back to your pea shooter until you stumble into some extra firepower. It’s a bit of a drag, but given the austerity of most shoot em ups, it almost feels generous (rather than having to start all the way back at the beginning).

The story mode starts well, in terms of gameplay, but is largely incoherent and forgettable, even if it has surprising moments of profane energy. The yarn about intergalactic war and time travel is about as understandable as the mishmash of (what sounds like) German played backward that drives the dialogue. Don’t sweat the story; just think about how you’re going to avoid the 15 heat-seeking clusterbombs that a gargantuan drop ship just launched at you. That’s a story for your friends that’s more intense than a furry mole’s quest for revenge.

Also, there are some sections of the game that just feel unnecessarily clunky and cheap. We’ll accept some horrible deaths as the hands of a mech that takes up three-quarters of the screen real estate, but two particular setpieces in the story –including a Death Star-like jaunt alongside some trash through a sensitive incinerator and a train sequence, felt imprecise and arbitrarily punishing. Granted, we cleared them, but there was a stronger sense of “don’t make me do that again” than “wow, I beat that!” Yet, the boss fights are enthralling, if not real nail-biters that’ll leave you hunched over the edge of your couch. One of the biggest bosses is a deadly maze full of laser beams and cluster bombs. It also has one of the most ridiculous names for a stage boss in recent memory. It is intense to navigate and survive.

With all of this in mind, Sine Mora is a good game, though not necessarily a standard bearer for shoot em ups. It’s got a unique art style, tinges of Grasshopper’s profane quirkiness, and offers some rather challenging wrinkles on the genre formula. Don’t believe for a second that “casual friendliness” means putting a controller in the hands of your game-dabbler buddies and expecting them not to either melt down or wave a white flag. But if you’re looking for a game to scratch your itch for a good challenge, look into this one without delay.