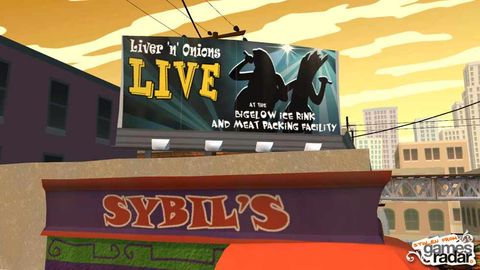 Good comedy is all about showmanship. A great comedian can make you laugh without saying a word, while a bad one will find it hard to elicit the merest hint of a chuckle, even if he’s managed to get his hands on Bob Monkhouse’s Big Book of Jokes. That’s the problem with Sam & Max: Beyond Time and Space (aka Season 2) – or the Wii port at least. The jokes may be (mostly) excellent, but they’re delivered in a stuttering routine that would result in even the best comedian being booed off stage.

It’s a crying shame because beneath the exterior of this horrible port lies a witty, often exquisitely written game. Following on from the conclusion of Season 1, Sam and Max’s first job this year is to disable a giant robot and deal with a paranoid, gun-toting Santa.

They’re soon embroiled in a quest to stop an erupting volcano, stop a camp vampire and his disco-dancing zombie army from taking over the world, stop three portly time-travelling Mexicans from… we were never quite sure what, and save the souls of some treasured acquaintances from an afterlife of eternal damnation. All five episodes are loosely connected, at least to start with, but just as the memorabilia from their adventures piles up in the pair’s messy office, the strands of subplots and side-stories coalesce into a satisfyingly hellish pay-off.

Returning characters and absurd situations fly at you at a breathless pace, and if you’re not familiar with the dog/rabbit crime-solving/causing duo and their swollen cast of friends and enemies, it can be difficult to take it all in. With in-jokes and knowing winks, Season 2 is clearly aimed (primarily) at fans of the first installment, so it’s not a great place to dive in.

Once you’re there, however, you’ll find the sort of sublime, demented pointing and/or clicking that only Telltale seem able to pull off these days. The nostalgia gland is notoriously unreliable, so we won’t attempt to match the writing in Sam & Max to our hazy memories of the genre’s heyday, but if we did, we think it would compare favourably. Some of the situations the pair find themselves in are, perhaps, a bit too self-consciously wacky, but that feeling dissipates into nothing when an unspeakably jolly elf casually utters the line, “It’s usually in the last place you look – like my tumour,” or when you happen across the wonderful, unexpected Resident Evil spoof.

The writing is of a consistently high quality, as is the voice acting, although Sam’s delivery is oddly flat sometimes. But despite their great characterisation, the duo aren’t the best people you’ll meet (one of those has to be Timmy Two-Teeth, the sickly rat suffering from Tourette’s). The benefit of having such a high volume of characters is that the less successful ones don’t tend to stick around.

The increasingly formulaic structure of the first three episodes is largely banished for the last two, which also blessedly ditch the obligatory ‘drive over things’ minigame. Puzzles start out small and a bit unambitious, but by the fourth (and best) episode you’ll be knee-deep in the the sort of complex time-travel posers previously seen in adventure game classic Day of the Tentacle. If it weren’t for the shocking sloppiness of the port, we’d have no trouble recommending such a funny, clever game.

However, it’s considerably more difficult to recommend Sam & Max – not to mention solve a puzzle, watch a cutscene or succeed at what should be a simple minigame – when the game jerks, wheezes and stutters every time you do something as memory intensive as walk across a room or use an object. At times – most of the time, in fact – it feels like you’re playing the most graphically intense PC shooter on a tiny pocket calculator, or watching an HD movie on an ’80s mobile phone.

Great lines are destroyed by voices loading faster than the characters’ lips, and minigames (that you need to complete in order to advance in the game) are rendered damn-near impossible thanks to the primitive, choppy framerate. We got through them thanks to sheer perseverance and a previously healthy stress ball (RIP, old friend), but we wonder how many others will have the patience.

The game’s never entirely unplayable, but it sails so close to the wind that you’re going to need a serious amount of dedication to run the gauntlet of its broken minigames – and a shedload of imagination to colour in the jokes left flattened by the chugging, useless mess that is the game’s engine. It’s difficult to appreciate a joke when the execution is this lousy.