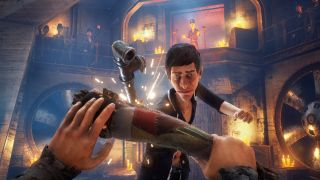 We Happy Few is a game of big ideas and very dark thoughts. What impresses most, initially, is how the game manages to craft a unique dystopian world in a medium so utterly stuffed full of dark futures and alternate histories. Sure, comparisons to BioShock are more than justified in terms of what We Happy Few is trying to achieve, but the post-WW2 version of Britain that it portrays has its own distinct feel. And yes, it’s obvious from the start that this game is the product of a smaller studio mixing it with the mega-developers (see also: Hellblade: Senua’s Sacrifice), but the beauty here rests in the quality of the ideas, rather than their lavish presentation.

It all starts with one of three playable characters - Arthur - performing his role for one of the game’s all-powerful ministries. He’s censoring news articles from before the war, removing anything that gives a glimpse at what life was like before the German victory (and an unfortunate chemical weapons incident); before the population of the UK was controlled by a drug called Joy, which shields them from the harsh reality of their world. For narrative convenience, Arthur quickly shrugs off the effect of Joy after reading about a news story centred on himself and his brother, and promptly escapes the building, pursued by eerily aggressive, smiley-masked policemen.

The rest of the ‘tutorial’ level sees Arthur exploring the world outside the fictional city of Wellington Wells, where gangs rule a murky, overgrown rural area. The guys from Complusion Games tell me that although the three main areas in the game are procedurally generated - meaning they’re slightly different each time you play - this opening zone is scripted, to help players get a feel for the action. I’m tasked with finding a way into the city proper, and meet a bluff Scottish man who will help me if I can retrieve his war medals from a nearby Hooligan camp. Ok, sounds simple, and this is the tutorial after all.

The Hooligan camp is clearly a trap, and before I know it Arthur is inside a makeshift arena, fighting for his life against an old friend. Well, a journalist who did nothing but plagiarize all Arthur’s stories. You can opt to kill or maim your foe, but either way you learn how fighting works in We Happy Few. It’s melee based, and not hugely satisfying, but fits in with the world nicely. Once you’re done here, it’s time to practice a bit of stealth and lockpicking. Almost all the tools you use in this game have to be crafted from raw materials, so you need more than just a bobby pin before you can pick a lock.

Stealth also means silent takedowns and distractions. I choke out an unfortunate hooligan who is using a urinal, and then in the next room use glass bottles to misdirect a patrolling thug, allowing me to sneak past and snatch the required war medals to complete my first proper mission. It’s all standard stuff for the particular action-RPG path paved by the likes of Dishonored, but the crafting adds an extra layer to We Happy Few, and the fact that the world is populated by such unsettling foes gives everything a vaguely creepy edge. There are skill trees to fill too, giving a sense of personal progression as well as narrative flow.

After this section I’m introduced to the second playable character, Sally. One of the cool things about We Happy Few is that you’ll get to meet other playable characters as part of the story, and you’ll see them living life before you actually get to control them. While this isn’t something I get to experience myself, Compulsion says that you’ll bump into Sally while playing as Arthur, and she’ll send you on a handful of unusual side-quests. She comes across as flakey and a little standoffish, and you’re probably not expect to really like her at the start. But Sally has secrets, and when you actually get to play as her, you’ll begin to understand why she acts the way she does. To say any more is a massive spoiler - which is a shame, because there’s plenty to say about Sally and what makes her such an interesting character.

The final playable character in We Happy Few is Ollie, and he isn’t someone I had chance to play as. But, again, he’ll link up with Sally and Arthur in interesting ways. The aim is that each character brings not only a new story, but a fresh perspective on the characters you’ve already played as, allowing you to see We Happy Few’s world from multiple angles. Of course, all that hinges on the strength of the main stories themselves (there’s little point in experiencing a poor story from one angle, let alone three), and from what I’ve seen We Happy Few is shaping up to deliver the narrative goods perfectly.

If there are question marks at this stage, they’re focused on the action and the occasionally poor British accents in the game. The latter isn’t a huge deal, but at the start fighting doesn’t feel hugely enjoyable, and the game’s systems are over-burdened with complications. It’s a tight line to tread between depth and simplicity in an action-RPG, and I’m confident that the complex start will eventually open up into a very satisfying, customisable, and inventive game later on. Regardless, there is a lot to take in during a short space of time, and a whole load of story threads to gather up. The fighting, though? Well, it’s unclear how much of that you’ll actually need to do, and there is time to polish it ahead of the August release.

First impressions of We Happy Few are of a game with huge ambitions, lovely story flourishes, and a desire to satisfy fans of deep narrative RPGs like BioShock, Fallout and Mass Effect. Right now it has rough edges, but the world itself is compelling enough that most players will overlook this in order to experience the clever plot unfolding around them. And if my brief time with some of the later characters is anything to go by there are some wonderful, dark secrets lurking in We Happy Few that I’m relishing the chance to uncover when the game launches on PS4, Xbox One, and PC on August 10.