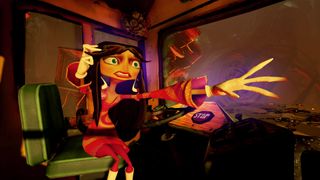 Everybody wants to have psychic powers. Whether that's so you can save the world as a superhero or just so you can know what your significant other is thinking, it's a universal fantasy. Psychonauts in the Rhombus of Ruin almost makes this dream a reality - if only for a brief, sometimes frustrating few hours.

Rhombus of Ruin isn't a full-fledged sequel to the 2005 cult classic (that's coming next year) but if you're planning to dive in, you ought to familiarize yourself with at least the core concepts of Double Fine's unique world. If you don't know who Raz is or what a Psychonaut does, you'll end up fairly lost during Rhombus' tale. And that's a shame, because once you get past that initial hurdle, this first-person puzzle adventure is a bite-sized treat.

As Raz, you'll need to use a combination of psychic powers such as telekinesis and pyrokinesis - that's moving things and setting them on fire, respectively - to solve puzzles which progress the plot. The most crucial of all your abilities is clairvoyance, which lets you jump between the viewpoints of stationary characters. This acts as both a clever workaround so that you don't get motion sick while also giving the game the feel of an early '90s adventure game, where each click would take you to a new screen.

As you hop from brain to brain, you'll naturally discover paths leading you to the next puzzle. Not once did I get turned around, lost, or confused on where I needed to be. Puzzled about what I needed to do? Well, that's another story.

In one particular puzzle, I couldn't figure out how to move a character who was standing on a tile from one end of the room to another (in a way so as to avoid obstacles or blocked paths). Because up to that point, the game had never let me move sentient beings, and it wasn't made clear that I could now move this person because she was standing on something I could move.

Another puzzle involves splitting and recombining pieces into their individual components, letting me assemble the item I need to progress. However, this was the first time the game let me combine items I could manipulate with the environment, causing me to again struggle.

It's not that the rules of the world felt broken or unfair, but a bit more heads-up in these scenarios would've been appreciated. Thankfully, while it can be frustrating to feel like you're just mashing buttons and smearing your psychic fingers over everything in the vague hope it'll do something, most puzzles make logical sense and it only takes a hint of effort to solve them. There's a brisk pace to the sense of progression, so even when you do get stuck, it's not long before you're back on track again.

All told, Rhombus of Ruin can be completed in just shy of two hours, less if you're a particularly clever little psychic in training. There's no grand revelations or shocking twists, but if you're a fan of the series (can we call it a series now?), you'll have fun revisiting these old friends and laughing at the jokes. There's even a boss fight near the end which feels very, for lack of a better word, Psychonauts-y.

It's certainly no killer app, but Rhombus of Ruin serves its purpose as a dip of the proverbial toe back into the Psychonauts pool, and is one of the most thorough and well-designed games I've seen on PlayStation VR. It might not turn you into the next great psychic mastermind, but it'll give your brain some exercise.