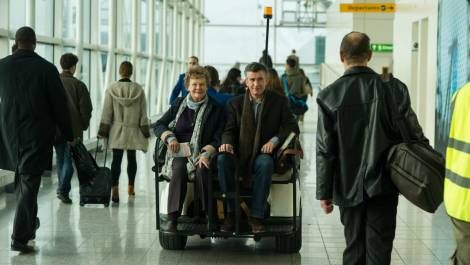 An elderly Irishwoman searches for the son who was stolen from her by nuns 50 years ago.

Sounds like a real weepie, right? That it’s nothing of the kind is thanks to Stephen Frears’ understated direction, the skilful script from Steve Coogan and Jeff Pope and, most of all, the consistently diverting interplay between Coogan and Judi Dench.

Coogan plays journalist and disgraced ex-spin doctor Martin Sixsmith, on whose non-fiction book The Lost Child Of Philomena Lee the script is based. Lasting round for a source of income, he hears of Philomena (Dench) who, having got pregnant as a teenager, was disowned by her family and shoved into a Tipperary convent where the nuns put her to unpaid work in the laundry.

When her son was three years old they flogged him off to an American family looking to adopt. Now, half a century later, she wants to find him...

Despite his distaste for ‘human interest stories’, Martin finds himself drawn into accompanying Philomena, first to the Irish convent and then to Washington D.C., in search of her son.

The relationship between Martin and Philomena fuels most of the laughs: he’s sophisticated and cynical, she’s an avid reader of Mills & Boon novels – and innocently delighted to find she can watch Big Momma’s House on the huge flatscreen in her D.C. hotel room.

Dench, drawing on her own Irish family background, scores another acting tour de force, pitch-perfect in her accent and lacing Philomena’s naivety with an innate shrewdness. Coogan, meanwhile, tones down the Partridge mannerisms to give a portrayal of unexpected depth.

For all its humour, though, Frears’ film doesn’t pull any punches as regards the behaviour of the Catholic Church, sometimes glancing towards Peter Mullan’s more single-mindedly bitter The Magdalene Sisters (2002). Philomena ’s final revelation of callous sanctimony will leave you gasping.