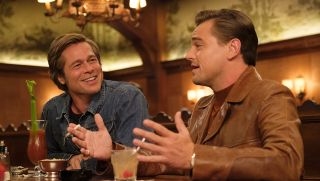 Quentin Tarantino’s ninth (and possibly penultimate) film, Once Upon a Time… in Hollywood is nearly upon us, and it’s one of his most personal movies yet. Set in 1969 Los Angeles, it sees Tarantino revisiting a time he vividly remembers from his youth.

The film follows actor on the wane Rick Dalton (Leonardo DiCaprio) and his stunt double/assistant Cliff Booth (Brad Pitt). Rick’s gearing up to head to Italy to star in a spaghetti western, but he has a pilot to shoot first. On the periphery of the story are Charles Manson and his acolytes, and tragic star Sharon Tate (played by Margot Robbie).

Playing out on an epic canvas, the film also features Tarantino trademarks like jet-black humour, killer dialogue and an eclectic soundtrack. You can take an exclusive look at some new images from Once Upon a Time… in Hollywood, courtesy of our sister publication Total Film magazine. There’s a new look at DiCaprio’s Dalton on set of a western, as well as Dalton and Booth looking insanely cool behind the wheel of their cars. Check them out below now:

Inside the new issue, Total Film gets full, unbeatable access to Once Upon a Time… in Hollywood, joining Tarantino and his cast on set, at a photo shoot and at the Cannes Film Festival. The inspiration for Rick and Cliff came from real life, says Tarantino. “I’ve met a couple of actors that have had their own stunt guys for, like, 10 or 15 years,” he says, “and it’s an interesting dynamic that they have.”

Tarantino’s own memories of the place and time in which the film is set fed into the extremely detailed production design. “What was fascinating to me about this movie was the way we really got, as actors, to immerse ourselves in that time period,” DiCaprio tells Total Film. “I mean, it was visceral for us and it was tangible. It was tactile because Quentin doesn’t really like to do much CGI work – if any. Actually I’ll correct myself: none.”

Once Upon a Time… in Hollywood opens in the US on July 26 and in the UK on August 14, and you can read much more about it in the new issue of Total Film magazine, which is on sale this Friday. As well as that enormous access-all-areas feature, the issue comes with a special supplement celebrating Tarantino’s career, and a double-sided art card featuring in-world posters from Once Upon a Time… in Hollywood. The supplement features a brand new interview with Quentin Tarantino, and also revisits all of his films to date.

If you’re a fan of Total Film, why not subscribe so that you never miss an issue, and you’ll get exclusive subscriber-only covers delivered directly to your doormat, along with all the gifts, before the magazine hits shelves? What are you waiting for? We’re currently running a subscription offer where you can subscribe from as little as £12.25 every three months, and you’ll also get five blockbuster movies to run from Rakuten TV (which you can watch on any supported device including Smart TVs, consoles, tablets, smartphones and more). Head to My Favourite Magazines now to take advantage of the offer. (Ts and Cs apply).