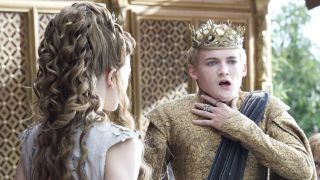 Poor Joffrey. Just kidding - but at last Jaime now knows who killed his spoilt, pathetic, cowardly, psychopathic (I could go on, but you get the general idea) son. Revealing that she was the mastermind behind Joffrey’s demise, Olenna’s big speech at the end of Game of Thrones season 7 episode 3 is the only way her character could have died. Now that the Tyrell house is extinct what better way to commemorate them than with a run-through of precisely how Olenna and her accomplice assassinated Joffrey?

First thing’s first: the poison used is called ‘the strangler’. Unlike traditional poison, it’s not in liquid form - instead it’s solidified into a pale purple crystal. Looks pretty, right? Pretty enough to go in a necklace, certainly… just like the one Ser Dontos gives to Sansa Stark before Joffrey’s wedding to Margaery. Ser Dontos - as in the drunken nobleman who Littlefinger enlisted to carry Sansa to his ship (and to safety) after Joffrey’s death. Funny, that.

During the wedding, Sansa is understandably feeling quite downtrodden. Seeing your former betrothed marrying a noblewoman who showed you kindness and being in a sham marriage to his uncle will do that to you. Seeing her solemn face, Olenna comes up to Sansa and comforts her, expressing her condolences at Robb’s death. Fiddling with her necklace, she contemplates how awful it is for someone to be killed at their own wedding… as she removes one of the stones. Spoilers: it’s not a stone. It’s crystallised poison, all ready to slip into Joffrey’s cup. Littlefinger says it himself.

When Tyrion pours the drink we get a shot of Olenna’s face, implying that she’s got her eyes on it. Seeing as she’s sitting close to the main table, she must have found an opportunity to slip it into Joffrey’s drink. Need more evidence? When she confesses discreetly to Margaery she fiddles with her necklace in exactly the same way she did to Sansa as a subtle hint to us that she’s telling the truth.

So there you have it. Olenna and Littlefinger paired up to execute the tyrant, with it being a show of Littlefinger’s loyalty to the up-and-coming Tyrells. As he puts it: “nothing like a thoughtful gift to make a friendship grow strong”.