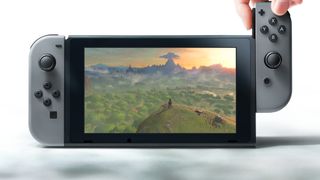 Anonymous sources allegedly familiar with the Nintendo Switch's final specs told GamesBeat that the system will use a custom Tegra X1 chip. While we still don't know any specifics in terms of power consumption, giga/tetraflops pushed, or core spin speeds, we don't really need to. If the Switch is using a Tegra X1, that means it's rooted in Maxwell architecture, and that can tell us a lot. More than we already deduced when Nintendo announced its partnership with Nvidia.

So, let's break down what this means. To reiterate, this means the Switch is likely not going to be as powerful as the Xbox One or PS4. It's impossible to say by precisely how much the system will lag given that we don't have benchmarks or speed test numbers, but the X1 is a chip built for smartphones and tablets, while the Xbox One and PS4 have chips built for home devices. Think of it like comparing a mid-range laptop (the Switch) to a mid-range desktop (the PS4 and Xbox One).

However, raw power isn't everything; while the Wii U lagged significantly behind Microsoft and Sony in terms of processing, it was still able to churn out a few games, such as Super Smash Bros., that ran at native 1080p resolution - something not even the gorgeous Star Wars Battlefront can achieve on PS4 and Xbox One. Numbers are not always a good indicator of visual quality.

And let's not forget that the PS3 was technically more powerful than the Xbox 360. This resulted in some amazing first-party exclusives, yet PS3 versions of multiplatform games could look worse due to its unique chip design. I would expect the same here: third-party games that look alright, if a bit behind the competition, but first-party games that can look stunning. Hell, just look at The Legend of Zelda: Breath of the Wild.

Keep in mind too that the Switch is meant to be a home console and a portable one. If customers treat it like they treat the 3DS, they really only need to worry about how it looks on the built-in screen, which is rumored to display at 1280x720 resolution (a fair step up from the Vita's 960x544 screen, and a definite step up from the 3DS' 800×240. An off-the-shelf X1 is more than capable of displaying modern games at that setting, let alone the custom version Switch will be using.

So while Skyrim might look a little blurrier on your TV when you play it at home (at least compared to PS4 and Xbox One), it'll look just fine when it's displayed on the portable screen. Such is the trade-off for being able to pick up a game and take it with you. And if you're okay with how games currently look on 3DS or Vita, you'll be satisfied with the Switch as a handheld.

Now, all of this so far has been silver linings to what I would personally say is a bit of disappointing news. Considering the impending release of an X2 chip based on newer architecture, I was really hoping for the Switch to have a bit more oomph. But there's one realm that having a Maxwell architecture X1 chip gives Switch an undeniable advantage any way you look at it: price.

Older technology that's not as expensive to manufacture means a much lower price for you and me. The Nvidia Shield, a tablet that - much like the Nintendo Switch - is portable gaming device powered by a Maxwell chip, retails for $200. The Switch will use newer, proprietary technology, so I wouldn't expect it to be that cheap. But this suggests that those $250 Nintendo Switch price rumors we keep hearing have at least some merit.

We likely won't know the full scope of the Switch's power until possibly January, when Nintendo is set to give the world a slew of new details, or more likely March, when it launches. But hopefully this helps set your expectations.