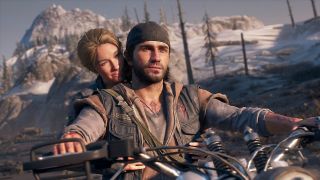 There's a lot going on in Days Gone. Between the flesh-tearing freakers, the cults, and rival biker gangs - not to mention hero Deacon St. John's inner turmoil about his lost wife Sarah - there's a whole mess of storylines to follow, and a very distracting open-world to explore all the while. That's why developer Bend Studio looked to an unlikely place for inspiration on how to keep you hooked: Netflix and chill.

"It's just literally having the threads be like a Netflix menu, so that you see them there," explains creative director and writer John Garvin. Pause the Days Gone action at any time and you can go into the menu and flip through the storylines Deacon has encountered, choosing which one to follow next.

"So [it's] almost like each of the missions is an episode in a series; you can always kind of pick up and see where you are in that storyline," says Garvin. "It was just a way of treating it the way people consume entertainment now, episodically, like through Netflix."

The developers also simplified the storytelling for the player. In early builds, you were occasionally asked during cutscenes to make simple choices - should you let your BFF Boozer keep hit shotgun? Or borrow it? - but now the narrative happens much more organically.

"In the alpha build, there were a number of story points where the player could make binary story choices," says Garvin. "We removed those post-alpha to make the story progression clearer and stronger. The ability to make choices remains an important part of Days Gone and focuses on gameplay: earning trust and credits at the encampments, how to upgrade your bike and weapons, how to spend points on Deacon’s skill tree, which storylines to complete and in which order."

You can read more about the world of Days Gone in our hands-on preview, and in our full interview with Garvin here. Days Gone will be released on PS4 on April 26.