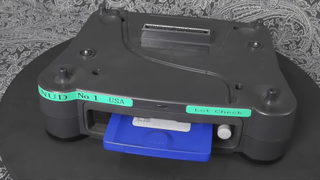 Remember that Sony/Nintendo PlayStation prototype someone discovered in their father's old "junk"? Well, YouTuber MetalJesusRocks seems to have an uncovered a similarly impressive find: a US version of the 64DD accessory for the Nintendo 64.

If you need a quick history lesson, the 64DD was a fairly large device that snapped onto the bottom of the N64. It was intended to run larger, magnetic disk-based games, as well as give the console a connection to this little thing that was popular at the time called the worldwide web.

The 64DD launched in Japan in 1999, but failed to catch on. Only 10 games were made for it, and the US launch was scrapped. And that's where the fact that MetalJesusRocks' 64DD is in English becomes really interesting.

The first thing to note is that the copyright dates printed on the bottom of the 64DD are 1996 and 1997. That's two years before the add-on released in Japan. MJR assumed that, since the dates were so early and the boot-up screen was in English, it was a development kit or prototype for the never-released US version. However, a former engineer at Nintendo  informed him that nope, this was a finished, retail product.

The English 64DD also came with a blue disk, but so far MJR has been unable to get the machine to read it. I'd say that no matter what is on it, it's quite the find.