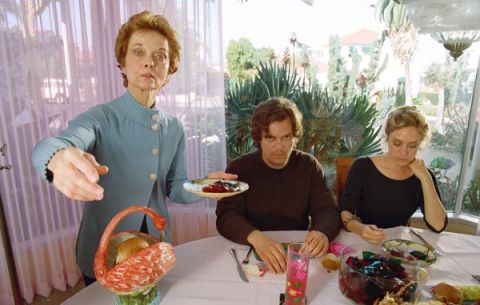 My Son, My Son, What Have Ye Done review - Static, posed shots overlaid with yodelly Spanish folk music; actors standing next to each other shouting dialogue into the middle distance; a dwarf in a tuxedo (clearly Lynch’s scrawl on the beermat), angry ostriches (Herzog’s bird fear)…

On paper, a Lynch-produced Herzog movie looks like a good – if a touch challenging – idea. Sadly, the dish doesn’t reflect the recipe, emerging as a gloopy stodge of clashing styles, templated obsessions and aggravating, overtly experimental tropes.

It’s a plodding, ponderous retrospective on the events that pushed dysfunctional San Diego ’burber Brad (Michael Shannon) to slice up his mum (Grace Zabriskie) with a ceremonial sword.

After the killing, Brad holes up with – apparently – two hostages and his tale unspools in flashbacks related by Brad’s girlfriend Ingrid (Chloë Sevigny) to chief negotiator Hank (Willem Dafoe). Trouble is, Brad’s a fully-formed raving crazyman from the start.

There’s no sense of triggering trauma or steady deterioration. He talks to the flamingoes (“You’re my little eagles…”), worships a can of oatmeal (“I’ve seen God in my house – in the kitchen!”) and shuffles around in an arrested man-child funk while his volatile ma serves up shuddering mounds of jelly (“It’s good for the bones!”).

None of the actors look like they care (Dafoe’s phone-in is a shocker), Lynch’s influence barely registers and Herzog’s listless direction suggests he’s not that bothered, either.

You should embrace their collective apathy and not be tempted to flush away 90 minutes of precious life on the sorry sight of two great auteurs cancelling each other out.