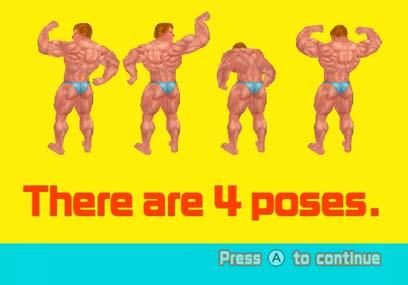 Who doesn’t want to see a dancing polar bear in a tight Speedo gyrate around to thumping techno and bright flashing colors? If you recoiled in horror after that last sentence, then hold on to your biscuits, because Namco has just served up one of the most bizarre WiiWare games we’ve ever played. Straight out of Japan, Muscle March is about a gang of ultra muscular dudes in tight g-strings flexing their manliness in different poses while chasing after criminals who repeatedly steal their protein powder. Uh… yeah.

If you aren’t already on drugs when you boot up Muscle March, the game does a good job of making you feel like you are. It’s absolutely packed with absurd and outrageously funny WTF moments that will make you wonder if you’re actually seeing the stuff you’re seeing as you play. You start out by picking an uber buff, more than half-naked guy from among a handful of characters (to be fair, you can also play as a super mannish-looking muscle gal or the aforementioned polar bear if you choose). The way your selected character immediately busts out a very elaborate sequence of exuberant dance prior to even starting the game is a pretty good indicator of the weirdness to come.

In each level, one of many wacky villains makes off with a beloved canister of your protein mojo, spurring a flailing conga-line style chase sequence that winds through some crazy environments. You’re initially stuck at the very back of the line of characters chasing after the thief, who smashes through walls making different flex poses in an attempt to thwart your mob of angry muscle heads.

Once the fleeing bandit crashes through a wall, you have a split second to wield both the Wii Remote and the Nunchuk to make the exact same pose with the weights you’re carrying in order to fit through the hole. Your beefy comrades inevitably fall out of line as the entire procession speeds up, leaving you to catch the thief in what ultimately ends up as a big dog pile of sweaty guys. That pretty much describes the entire game. When you do eventually wrap up a series of matches, you’re treated to a synchronized dance routine, and an old bearded man carrying a dumbbell staff rates your manliness with phrases like “such masculinity!” and “soooooo strong!”

Going solo lets you chase through a packed city, a traditional village, and outer space, though each stage only has three levels. There’s also hot-seat competitive challenge mode for up to four players. The dizzying psychedelic environments (interspersed with animated photos of random animals) mix well with the unintelligible, high-speed Japanese pop to intensify the overwhelming ridiculousness that permeates every second of Muscle March. While the gameplay is pretty basic, pulling off the four different flex poses on speedier levels is pretty challenging. Muscle March is a lot of fun simply because it’s just so damn strange. It’s definitely worth a download, even if you only pull it to make your friends’ jaws hit the floor from time-to-time.