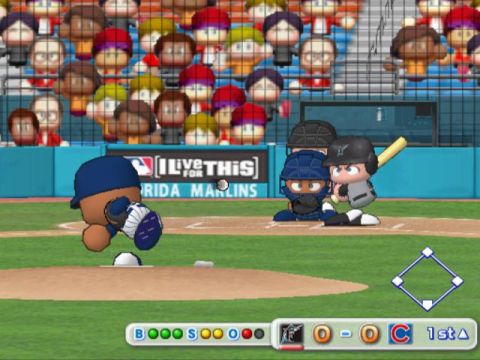 Major league ballplayers are filthy, disgusting creatures. Constantly spitting and grabbing their crotches, they’re the furthest thing possible from lovable cartoon characters. It’s remarkable, then, how MLB Power Pros manages to turn everything about these gruff, vulgar “athletes” into cheek-pinchingly cute caricatures of themselves on and off the field.

MLB Power Pros 2008 is the follow-up to last year’s long-awaited stateside debut of this decidedly Japanese baseball franchise, and in many ways it falls victim to that most American of sports game curses – the dreaded Roster Update. Considering that its release was timed right with the major leagues’ trading deadline, it doesn’t quite get that part right either. Power Pros limps out of the starting gate featuring lineups with All-Stars such as Manny Ramirez and CC Sabathia haunting their old ballparks. This may (or may not) not be a big deal to the kids who are the likely intended audience, but without the ability to modify rosters via web downloads, it’s an annoyance that surfaces pretty quickly.

As it is, the adorable on-field action remains mostly unchanged from last season. Perhaps that’s why there’s so much other non-baseball stuff crammed onto the disc; despite the elegant simplicity of hitting and pitching that invites everyone to the mound, it can get old pretty quickly. A cocked head from a pitcher questioning an umpire’s call or a batter spinning like a top when he whiffs on a pitch is funny the first few times, but there are few additions to the core gameplay that’ll get anyone but the most ardent Power Pros fan excited to head back onto the field so soon.

In reality, Power Pros is a lot more about its various old-school JRPG-style game modes than fundamentals of fielding and baserunning. Your typical American sports gamer will be utterly baffled by both the Success and MLB The Life modes, as these quirky, kiddie-themed adventures sport all of the accoutrements of a standard role-player. You’ll manage relationships, purchase items, and equip your player with upgraded gear; in-game scenarios are the substitute for combat. Hell, even the traditional seasons feature anime secretary love interests and an obsessive need for scheduling practices. This ain’t your typical hardball sim.

While Power Pros 2008 offers an undeniably massive amount of modes and options at a terrific $20 price, we could’ve easily waited until next spring for a truer, fuller follow-up. Veterans of last season’s title have pretty much played this game already, but it is a nice place to start if you’re new to the series. Don’t blame us, though, if you start feeling a lot like Bill Murray in Lost In Translation. It’s a culture shock in just about every way.