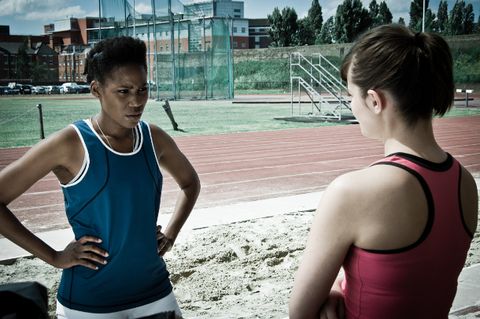 The One Where : Curtis embraces his feminine side.

Verdict : Hang on. Did Curtis just… smile ? We did just see that, right? It may sound like a small moment on paper, but Curtis cracking a cheesy grin is arguably the biggest step forward for the character in over two years. And it’s about time. Curtis is never going to be throwing out one-liners, but it’s fun to see him finally loosen up a little and put his troubled past behind him.

Curtis has always stood out in the group as the only one who isn’t a complete and utter disaster as a human being. As he likes to point out, he wasn’t really to blame for being on probation after all. But here we discover he’s fallible where young men’s egos are at their most vulnerable – in the sack. It’s a neat reversal, previously Curtis had been the one bastion of masculine prowess on the show, bedding (or maturbating in front of) women left, right and centre when the rest of the gang’s male constituent continually tried and failed to prove their worth in the bedroom. Oddly enough it makes him much more likable than ever before.

The highlight of the episode, however, is Kehinde Fadipe’s unnervingly accurate performance as Melissa (Curtis’ female alter-ego). She has the mannerisms, vocal patterns and that dismissive stare down to the finest detail. Nathan Stewart-Jarrett in drag probably couldn’t have done a better job.

Rudy gets several more top comedy moments, and Kelly shares a sweet scene with Seth, catching a lift to a destination barely 10 seconds away (mark our words, if they’re not an item soon we’ll eat our orange jumpsuits), but for the most part the rest of the gang are left on the sidelines this week, Curtis’ journey is what’s important. Even the creepy date-rapist plot is one we’ve seen many-a-time before and only really serves to give Curtis a climactic hero moment. What’s more interesting is the casting. At least from the outside Mark looks like a fairly normal bloke, moreso than probation worker Shaun anyway – who we would have pegged as the rapey type for that sleazy haircut alone.

LMAO : Alisha’s impression of Curtis during his, er, “moments of self-pleasure” had us in hysterics. It’s the facial expressions that make it, clearly all that practice during the first season paid off.

Top Tune : The second song with a Scott Pilgrim link in as many weeks can be heard during Curtis/Melissa’s first training session – “Invaders Must Die” by The Prodigy, which played over the (ace) trailer to that film.

Star Turn : Craig Parkinson’s Shaun is still one of the best things about the show. No wonder he hasn’t (yet) gone the way of most probation workers in the Misfits -verse.

In-joke : Apart from being rather tasty, Cornettos nowadays are most famous for their association with the films of Edgar Wright, Simon Pegg and Nick Frost. Misfits seems to be muscling in on the action with Alisha and Kelly seen scoffing down on a pair of ice creams this week as Nathan was at the end of the first episode of series two.