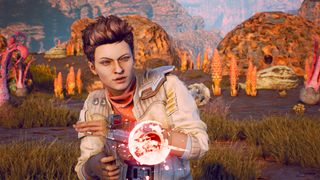 It looks like The Outer Worlds might be a brand new series for Xbox gamers going forward. Speaking during an interview with Game Informer, head of Xbox Studios Matt Booty revealed that Microsoft believes The Outer Worlds has the potential to be "an enduring franchise", hinting at the possibility of an Xbox exclusive sequel. Microsoft acquired Obsidian, the studio behind The Outer Worlds, back in 2018 - making it one of the 15 names that currently make up the Xbox game studios roster alongside the likes of Ninja Theory, Rare, and Playground Games.

Booty talked extensively about how Microsoft approaches acquiring third-party studios, during which he revealed that there are “projects underway at Obsidian that we’ll learn about in the future that they’ve already started working on”. How intriguing. To add to the excitement surrounding this revelation, Booty went on to talk about The Outer Worlds a bit more, expressing Microsoft's high hopes for the game and the potential it holds for the future.

After being asked if Xbox has plans to make an Outer Worlds 2 and if it could it be a big Microsoft exclusive going into the future, Booty said: “I think that’d be that kind of game. From what we’ve seen of the Outer Worlds, my hope is that that’s something we can build and that it really becomes an enduring franchise and it really starts to grow and we can help expand that.”

When approaching the subject surrounding making a series an Xbox exclusive, Booty explained that it depends on if it suits the franchise and whether it would benefit from being open to all platforms, or be better supported by the resources Xbox can put into it. Booty explained that he believes The Outer Worlds could be a franchise Xbox helps to build on in future because of its big universe and narrative.

In the rest of the interview, Booty shed more light on the future of Xbox’s game library and revealed that several Xbox exclusives are in the pipeline, which is good news ahead of the release of the Xbox Project Scarlett. Whether these exclusives will be ready for when the new console is due to release in holiday 2020 remains to be seen. The Outer Worlds is set to release October 25 and looks set to be one of this year’s most exciting releases. To hear a sequel is already in the realms of possibility is pretty exciting.

Want to know more? Check out our preview and find out why The Outer Worlds is the best RPG Bethesda never made.