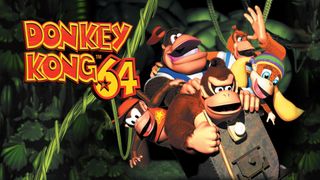 Hindsight is a wonderful thing. It's a phrase espoused by many in the games industry, particularly those who design and develop the titles that we play and critique.

For Donkey Kong 64, that analysis has been ongoing for two decades. Rare's 3D title is considered to be the perpetrator behind the downfall of collect-a-thon platformers. Plenty have been critical of Donkey Kong 64's vast amount of collectibles – comments that still affect those who poured their hearts and souls into it. Donkey Kong 64's dev team has long disbanded but, on the eve of its 20th anniversary, a feeling of 'what if' continues to dominate thoughts.

"There's a lot I would do differently," George Andreas, Donkey Kong 64's creative director tells me. "We would scale things down, make things look sharper, and focus on fewer things. I would have unified the banana system. That would have made it much easier for players to play through. I'd also promote more swapping between characters at regular intervals, but just having a consistent banana count, rather than multiple colours, would have improved things."

Though players only needed to collect 281 items to achieve its zany 101% completion, Donkey Kong 64's staggering number of collectibles – 3,821 in total – remains a world-record. The reason behind it, Andreas explained, was down to a certain bear-bird duo that had earned Rare another platforming hit 18 months earlier.

"Banjo-Kazooie had a lot of great things about it," says Andreas. "So one of the first things Tim Stamper – Rare's co-founder – told me was 'Make sure there's lots to collect'. I'd always go back to him and say 'Here's some' and he'd go 'No, more things'. We had to make it as much of a collect-a-thon as possible to help try and differentiate it."

There might be no new Donkey Kong game on the near horizon, but there's still plenty more games to come. Here's the best new games of 2019 and beyond.

"Having a cast of five characters, which you could play and swap between, gave it a slightly different edge," Andreas said. "Then we had a lot of what I used to call 'thrilling moments', so the minecart rides or slides that made it more exhilarating than the more laid-back approach to adventuring of Banjo. We also tried to punctuate levels with over-the-top boss battles."

Donkey Kong 64's playable quintet – Donkey, Diddy, Tiny, Chunky, and Lanky – might have seemed like overkill to some players. Their inclusions, though, enabled Rare to get creative with another gameplay mechanic – puzzles. Each character's unique ability, such as Diddy's jetpack and Chunky's superhuman strength, presented opportunities to test gamers' problem solving.

"It added another layer of richness to the discoverability of each new character, and gives them both a share of the spotlight and puzzle solving aspect that feels quite fresh," Andreas said. "The expectation was that, once you enter a new area, you'd traverse it with one character and see a different puzzle element. You'd think 'Oh, what would happen if Chunky Kong was here?' and it allowed the player to predict what puzzles they'd have to face with different characters and, in theory, keep the game fresh."

Let's all do the Kong-a

Gameplay wasn't the only element that needed to distance itself from Banjo-Kazooie. The game's soundtrack and the infamous DK Rap – more on that later – also had to be unique. For Grant Kirkhope, making Donkey Kong 64's score distinctive was all the more salient due to the number of Rare projects he was working on.

"I was doing DK64, Banjo-Tooie, and Perfect Dark all at the same time," Kirkhope revealed. "In my head, I had to try and separate Banjo-Tooie from DK64, and I always felt DK64 was a darker game. Dave Wise's soundtracks had some moody parts to them, so I felt like I needed to bring that moodiness back into DK64."

Wise's Donkey Kong Country soundtracks, as iconic today as they were in the 1990s, formed the backbone of Kirkhope's ideas. A reimagining of classic number Jungle Japes aside, however, Kirkhope elected to make each tune from scratch, and the Nintendo 64's 4MB of RAM - huge for its time - altered the way that every track was written and produced.

"We actually built our Midi orchestra inside the cartridge of the dev kit," Kirkhope explained. "We could link our PCs, which were running Cubase via Midi to the dev kit, so we actually played the sounds in it when we were writing. We weren't writing tunes in full quality and trying to crunch them down and get them into the machine – we only played the instruments in it."

The Donkey Kong Country series' 2D graphics earned Rare plenty of plaudits between 1994 and 1996. Making the leap from side-scrolling affairs to 3D environments, then, proved a massive task. Initially developed as 2.5D platformer like PlayStation title Crash Bandicoot, the successor to Donkey Kong Country 3 was scrapped 18 months into development due to various issues. Recruiting Andreas to their cause, following his work on Banjo-Kazooie, the team dove headfirst into the 3D sphere.

"Going 3D was a whole different ball game because the technology, at that point, was in its infancy," lead designer Mark Stevenson said. "From an art perspective, you couldn't achieve anything visually comparable to the DKC [Donkey Kong Country] games. It was an incredible challenge to produce 3D graphics, and building 3D models was really hard work – they only had a few hundred polygons but it was tough using the tools we had to manipulate them."

"As an artist who was on the DKC games, I used to build and animate the characters from a fixed side-on view. Being able to see this character from any angle, you'd make an animation, put it in the game, and you'd think it looked good side-on, but awful from every other angle! It was challenging from a technical and design perspective."

Despite hardware limitations and the embryonic 3D technology, the team did manage to break new ground with the game's lighting using an unlikely ally - the N64's Expansion Pak, which doubled the console's memory to 8MB.

"It was one of the first N64 games to have dynamic lighting" Stevenson revealed. "You'd go into areas where there were swinging lights - they were pretty expensive and the game would slow down a lot. But we had this cheat system where, the first time you went through an area, the light would swing back and forth and record all the lighting data on the vertices, so after that initial pass it would just be playing an animation of the light."

A not so Rap-turous Reception

For all of the genius workarounds and pioneering development, Donkey Kong 64 will forever be remembered for the DK Rap. What began life as a lunchtime joke between Andreas, Kirkhope, and Rare programmer Chris Sutherland, the song was panned by fans and critics upon the game's release for its cringy lyrics and seemingly foolhardy attempt at a serious rap track.

"I thought everyone would get the joke but no one did," Kirkhope said. "It was the first time I'd ever had anyone write something negative about my music. I'd been fortunate up until then - people liked my tunes most of the time - and it was supposed to be a joke track about monkeys rapping about bananas and grapes, so I felt a little bit hard done to."

Like Donkey Kong 64, time has changed people's perceptions of the DK Rap. It's become a meme, been remixed by DJs across the globe, and appeared on DK-themed stages in the Super Smash Bros franchise. The DK Rap has taken on subcultural significance, and its tongue-in-cheek nature - one of Rare's hallmarks – has helped it to transcend generations.

"At the time, people opened up DK64, heard it, and thought 'this sounds terrible'," Sutherland said. "That was their opinion of it, but a lot of people who were playing were kids, so to them it was just a fun song. Those kids have now grown up and the perspective in that sense has changed."

"I'm glad I wrote it," Kirkhope added. "It's been a fun thing to have people take the mickey out of me for years about and, you know, my 17-year-old son and all of his mates know it. None of those guys were born when I did that and it's incredible that they know every word."

Working on a Donkey Kong title had the added pressure of living up to the character created by Shigeru Miyamoto. Doing so, while also capturing the essence of the beloved Donkey Kong Country series and including Rare's signature humour, was a daunting prospect – as Andreas found out to his cost during one preview playthrough with the Nintendo legend present.

"Miyamoto-san, Iwata-san, and Howard Lincoln – chairman of Nintendo America at the time – came to our new studio," Andreas recalled. "We switched on the game, they saw the rap, and then I started running around as DK. I swung on some vines, collected bananas, and they were beginning to really smile. And then I pressed the button to pull out the gun. It wasn't a textured gun that you might expect but a realistic shotgun with bullets flying out and with horrifying sound effects. You get so used to things being in development, even if it is a placeholder, and I completely forgot that it was in there. I'm shooting beavers, turned to my side, and see this look of horror on Miyamoto's face! Then he smiled and, taking some paper and a pencil, drew a coconut gun in front of us. It had leaves on it and he handed it to me. I looked at it and said 'Oh yeah, that's cool, we'll put that in' and the coconut gun was put in after that."

Donkey Kong 64 might not have lived up to everyone's expectations, but it still retains an ardent following who continue to humble Andreas et al with their memories of playing it. It's those fan stories and trips down memory lane that mean more to the team than the negative comments they received and, despite agreeing that it isn't a perfect game, shows that they got more right than wrong.

"I remember there was some sort of Super Smash Bros stream live in Australia a couple of years ago," Kirkhope said. "Someone was playing as DK, and the rap started. The whole room chanted the whole thing all the way through. I genuinely was in tears watching it because that's very special. You never think – and sometimes you forget – how much of someone's life it's a part of."

"I'll never forget, after the game launched, I was in New York with my partner." Andreas said. "We went into one of the major toy stores and we took the elevator down to the basement, which is where all of the video games were kept. I could hear this tune bellowing out , and it was the DK Rap. As I got closer, there was a 100-strong crowd of children and families huddled around this TV with this music blaring out, and all the kids singing along and families clapping along. It was a real eye-opening moment about how catchy the song was. I didn't care what happened after that point as it'd brought joy to those families."

"We made those games at the time thinking we were making something fun," Sutherland added. "You never thought people would be playing it in their formative years and going to be one of the key elements of their youth. We didn't expect to make this difference to people but it's great that we could."

If you like reading retrospectives and behind-the-scenes input into how your favourite games were made, you should give read Retro Gamer a read. It's an entire magazine dedicated to exploring the games that you grew up playing.