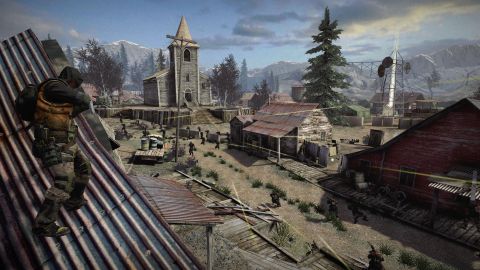 "As I’ve already freely admitted: I’m rubbish at MW2,which is why I prefer MAG: I’m slightly less rubbish at it. Where Modern Warfare 2is all lighting-quick, ruthless twitch shooting, Sony’s game is more methodical andthanks to thebigger maps I can head off to a safe haven when the pressure gets too much.Crucially it's farmore forgiving to new players."

You can read more of the same in hisopinion piecebut regardless of whether you agree or disagree with Dave’s views the truth is that MAG is a far different experience to MW2. In short, there’s room for them both to exist side-by-side.

For the uninitated, MAG is an FPS (d'uh), but played outwitha maximum of 256 players online.As opposed to the likes of Modern Warfare 2, the war-torn landscapes of MAG are big enough for you to scout out flanking positions before you go on theattack. And although you shouldn't expect too many buildingsto hide inside of (most are boarded up likeon acouncil estate) you may stumble across apeaceful patch and take a few moments of resttopick off enemies for a few minutes unhindered. Butunless you man up and get into the fray, MAG can be a slightly soulless experience.

Without a single-player campaign, your enjoyment of MAG hinges entirely on the actions of others. If your team is full of ham-fisted, f*ck ups – then you’re unlikely to win. If you’re squad is packed with battle-hardened folk who bark orders out incessently then you usually do, but your ears will be ringing from the chatter. Here’s a handy list of the folk you’re likely to encounter in MAG…

This half-baked chap turns up moreoften than you'd think. He's less concerned about what's happening on screen as he is about where he's going to score his next hash cake, which makes him a liability on the battlefield. On one ocassion we even watched in horror as we lay bleeding waiting for Captain Bong to revive us only to see him standing still while he was on the phone to his drug dealer. Apparently, Teddy in Baltimore has 'killer weed, maaan'.

These folk aren't as bad as you may think, and in fact it's good to know that these tactical savvy troops have got your back. They'll tell you when to flank, where to toss grenades and even when to shoot - not that you'll need that last prompt. It's only when they start with the 'holier than thou' crap that they start to annoy you. This is when you stand over themwhile they'rein thedeath throes - y'know, to teachthem a lesson.

No online shooter would be complete without the novices. If you're reading this review, you're probably one yourself. But it's the constant questions of 'how do we do this?' or 'why can't I call in an airstrike?' that reveal the true newbie. There's nothing worse than having one strafing around your vehicle switching between weapons, rather than fixing your ride. End their misery by running them down.

The ghosts of the battlefield. We're not talking about the people that don't own a headset, we're talking about the ones that do but don't utter a word. We know, because we can see the mic icon next to their user-name and we can hear them breathing too. Odd. We shouted at our silent friend more than once as they sat their like cowards watching an enemy knife us up.

"This is rubbish". "It's no where near as good as Modern Warfare 2" "Jeebus,all these guns suck". "Why am I even playing this?". Sadly, these people arefrequent within MAG and they're desperate for all to listen about howwhack it is whether you want to hear it or not. Jog on, dick-heads.

Ahh, the ultimate annoyance in gaming with headsets - twats that play music instead of discussing tactics. We got the full 12" version of Purple Rain (8:45)TWICE during one battle, which added a seriously contorted dimension toall the killing. We really wish these wannabe DJs would save their emotional tunes for when they're crying themselves to sleep at night.

All in all, it’s a fairly rag-tag bunch of mercenaries that come together to form one of MAG’s three factions –Raven, Valor and our pick S.V.E.R.Regardless of your choice, the core experience remains similar throughout.

See page 2 for how it works, game modes and why there is an 'I' in team. Sort of