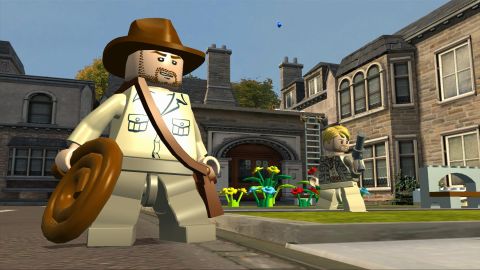 Thanks, Traveller’s Tales. Just as we’d all just about forgotten the horror that was Kingdom of the Crystal Skull, here comes LEGO Indiana Jones to supply the one adventure missing from the previous game. Oh, that movie. Post-traumatic stress... rising. Mental blocks... failing. Shia LaBeouf... exists. There was... a fridge. It hurts and it’ll take more than cute LEGO people to ease the pain.

Sorry. Not LEGO Indy’s fault. Still, make no mistake: this is primarily Crystal Skull: The Game. LEGO Indy 2 also revisits the original movies, but with most of the truly iconic scenes already done in the last game, they’re very short and unsatisfying. Only Kingdom gets a full retelling, split over three chapters, along with plenty of free opportunities to punch Mutt Williams again and again. So that’s a plus.

LEGO Indy 2 sticks firmly to the formula of the previous game. Run around, smash everything in sight, unlock goodies, construct items from LEGO piles, and watch cute tongue-in-cheek cutscenes that gently mock the story about as much as they retell it.

The main additions this time around are some genuinely snazzy giant bosses who look cool, even if they’re clearly there for the designers to show off and have nothing to do with the original films; a level editor; and a split-screen mode for playing friends and family. There’s also been a general streamlining of the old smash-and-grab formula, with far fewer scenes where it’s not obvious what you’re meant to do.

The driving levels are unbelievably appalling, and it would be good to have more puzzles that don’t just involve carting a box over to a big arrow. But after so many games, it’s no surprise that the majority of it is pretty slick.

The most visible change is that Indy 2 now uses a hub system for each movie/chapter of Crystal Skull, which looks excellent – a highly condensed version of each movie that lets you walk from Nepal to Sallah’s place just by running over a bridge, but makes it far too hard just to find the next map or other thing you need, even if you know the films. Last Crusade, for instance, starts you in a map based on Venice, but the action actually kicks off in Germany. Similarly, while it’s great that the hubs offer loads of bonus areas in addition to the story ones, it’s incredibly frustrating not to be told what items or skills you’ll need to bring along (anything from high jumping to a Staff of Ra) without actually going inside one.

A much bigger disappointment is what should have been the highlight – the level editor. It’s fun to play with, even if carrying objects around with a little LEGO man is much slower than just pointing and clicking, but very limited. You’re stuck building your puzzles in pre-designed arenas, and unlocking the different items is a pain. Most bizarrely, the levels you build are just for you – there’s no option to upload them anywhere, or a place to download anyone else’s worldly creations. LittleBigPlanet, this is not.

If you’ve played the first LEGO Indy, you know if you’re in the mood for more of the same, Crystal Skull style. If not, things get tricky. Overall, this is the better of the two, with more interesting design, a larger amount of stuff to find, and a much bigger scope. However, for the proper Indy experience made plastic, the nature of the films themselves mean you’ll get more from Raiders or Last Crusade in the first game.