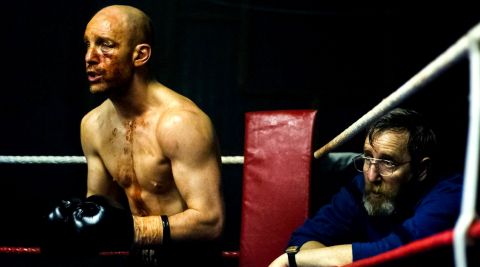 Gives the boxing pic a vigorous workout. Harris commits himself fully, both emotionally and physically.

In decent boxing movies, it isn’t the muscle that keeps us on our toes. Vulnerability is the suckerpunch of the genre’s canniest entries, reminding us that something is at stake – be it flesh, pride or a life. And the stakes run high in London to Brighton/Fortitude actor Johnny Harris’ multi-tasking debut as writer and lead in a London-set drama delivered with one-two wallops of stylish force and feeling.

Drawing on personal history for Jimmy McCabe, an ex-boxer on his uppers, Harris doesn’t go soft on his lead character. Sprawled on his floor in a block of flats awaiting demolition, Jimmy doesn’t look like he’s built to last, either. As first-time feature helmer Thomas Napper rams the camera up close to every life-etched crease on Jimmy’s face, Jawbone is established as an unforgiving, interior character study more than a straight genre workout.

McCabe once had class and bottle as a fighter, we hear, and wants to regain both (plus two grand) in an unlicensed bout up north. But another kind of bottle might kill him first: as he makes phone calls about training, the shop-lit off-licence shelf is a twinkle in the corner of his eye, signalling his losing battle with the booze.

On paper, the plot points sound as familiar as some of the script’s lumpier metaphors. “Get off them ropes,” McCabe is ordered as he trains. But the words resonate coming from the weathered support cast. As cornerman Eddie, Michael Smiley doesn’t say much, but invests every word with craggy authority. Ray Winstone is heart-breaking as Jimmy’s old trainer, his knees so worn he makes getting up from the washing machine look like a 15-round title bout. And Ian McShane makes devilish work of a pungent, pivotal cameo.

As for Harris, time spent training with Barry McGuigan pays off in a fully invested performance. As Jimmy sweats out his toxins, Harris ensures we swallow his damage and his determination. And he’s terrifically framed by DoP Tat Radcliffe’s images, which navigate their way between harsh close-ups, alcoholic-eye views of a rain-sodden London, and pulverising final bouts with an expressive fluency.

When that climax arrives, the combination of buffeting direction, Harris’ tender-tough commitment, and a demonic-looking opponent (name: Damian) keeps your eyes locked on the ring and your heart in your mouth. With the conclusion not remotely foregone, Harris nimbly dodges glib catharsis.

Gives the boxing pic a vigorous workout. Harris commits himself fully, both emotionally and physically.