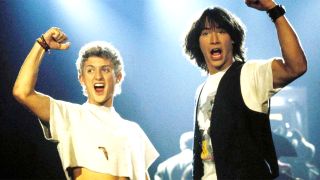 “I don’t think I’ve ever told anyone this before but when I first got the script, I just totally did not get it – at all!” Laughs Alex Winter remembering the first time he crossed paths with Bill S Preston, esq. Together with Keanu Reeves’ Ted “Theodore” Logan, the slacker duo brought peace to the universe and successfully survived high school in 1989’s totally non-heinous teen comedy Bill and Ted’s Excellent Adventure. “The language was so beautiful and hilarious and ornate and I just didn’t get it. It wasn’t until I started auditioning for it and I met the writers Chris Matheson and Ed Solomon, and director Steve Herek that I realised how infectiously fun it was to say that dialogue and I immediately wanted the part. I got really excited about it.”

Matheson and Solomon, on the other hand, never had any shortage of excitement for Bill and Ted. As comedy writers and best buds, their airhead teen counterparts had been living with them for some time before production on Excellent Adventure ever even began. “We would rent a little theatre every Sunday night and play around with ideas,” Matheson tells our sister publication SFX magazine. “The suggestion was two teenage boys talking about world affairs. It was me and Ed and I would say, ‘How’s it going, Bill?’ and he’d say, ‘How’s it going, Ted?’ and we just launched into these characters,” he recalls, effortlessly slipping into a pitch-perfect impression of the San Dimas duo. “Almost from the beginning they were just really fun to do. At the end of that evening we went out to a coffee shop and stayed in character. We just sat there eating food, drinking coffee and coming up with their story."

“Ed did stand-up comedy,” continues Matheson, “and at one of his shows he and I went on stage as Bill and Ted and answered questions from the audience. Everything was either ‘excellent’ or ‘bogus’ because that’s all they know,” he laughs. “I went off to graduate school and Ed was working for a TV show in LA but we would get on the phone and just talk as Bill and Ted for hours. By the time we got to the point where we thought we should do something with these guys we had already been playing with them for over a year. We had a very nuanced understanding of them.” It was this familiarity with the characters that helped them knock out a script for what would ultimately become Bill and Ted’s Excellent Adventure in just seven days. “It was uncanny because we knew them so well that we kind of knew what they would say,” he explains. “We would just be talking and one of us would be writing down the dialogue we were saying. It happened very quickly.”

Unbeknownst to Winter, it was this script (then titled Bill and Ted’s Time Van) that would help him forge a friendship that’s lasted almost thirty years. “We became incredibly close friends,” says Winter, recalling the first time he met co-star Keanu Reeves during the audition process. “We became really tight. If either of us hadn’t gotten the part, it would have been comical because we were like best friends by the time the audition process was over,” he laughs. “We both rode motorcycles. We’d go to the auditions and then we’d go back to one or the other’s house and just play bass.”

“It was pretty obvious to everyone that they were the two guys,” confirms Matheson. “They met, I’m pretty sure, waiting to audition, and they hit it off and are still close friends 30 years later. There’s a lot of chemistry between these two guys.”

Winter echoes the sentiment. “It was like play in a sense,” he suggests, discussing his work with Keanu on Excellent Adventure. “It’s like when you and your best friend were kids and you’d go out into your backyard and just go into some world until you got called in for dinner. That’s what doing those movies was like.” That said, casting Alex and Keanu did change the way Matheson and Solomon saw their on-screen other halves. “Ed and I both felt like losers in high school so Bill and Ted, for us, were kind of really lame outsiders who nobody liked,” admits Matheson. “Then you bring in Alex and Keanu and they’re both super-good-looking young guys with tons of charisma and they couldn’t be cooler! Of course that shapes things a little bit,” he smiles. “Bill and Ted got a lot cooler once Alex and Keanu showed up.”

With Bill and Ted raring to go, their excellent adventure was starting to take shape. Just a few final touches were needed before they could hit the circuits of time and get the hands-on experience they needed to ace high school history. “Rufus was originally their friend,” reveals Matheson of Bill and Ted’s time-travel mentor, played cooly by comedian George Carlin. “He was a 27-year-old high school junior and he had a dog named rufus. He drove them through time in his 1969 Chevy van. That got changed along the way, basically because of Back to the Future. Director Stephen Herek had the idea of a phone booth and all of us were so clueless and knew nothing about Doctor Who,” laughs Matheson. “It turned out to be pretty good idea. It worked.”

Maybe on paper – but when cameras started to roll? “If you look at the special effects in that movie... I know they tried but they were working with the equivalent of an Atari,” laughs Winter. “It was all practical for the most part. The phone booth was a real phone booth and it had this crappy little thing on the top which was the antenna that I was constantly breaking by accident. The phone booth was stuck hard on top of a hydraulic lift and we were just yanked up into the air against a blue screen and shoved around like a really low-rent rollercoaster. We had a great time."

The 25 best time travel movies to make your head spin

“It’s not showbiz nonsense,” continues Winter, “but we really were all in it together. The director was really young. It was exciting. Our production designer who put the booth together was Roy Forge Smith, the legendary Monty Python designer who did Time Bandits and Holy Grail so it was an awesome group of people, but it was low-budget and it was a practical-effects driven movie.

So a lot of times Keanu and I were doing practical stuff because there was no way to augment it. For the phone booth, it was eight of us jammed into a phone booth during a blazing hot Phoenix summer and it was totally stinky and horrible!” Matheson has similar memories from his time on the film shoot. “We were actually on set the whole time which was lovely,” he recalls. “It was a very nice family environment that Steve Harek created. We’re actually in the movie in the ice cream shop scene. It was a really fun experience.”

Cut to 2019 and Bill and Ted’s Excellent Adventure remains a firm favourite among moviegoers with the third instalment, Bill and Ted Face the Music, rumoured to start filming next month. Clearly these air-guitar loving dudes have struck a chord with audiences that refuses to fade. “The film has a lot of heart,” says Winter, pondering what might be to blame for Bill and Ted’s longevity. “It was made with a lot of heart and we played them with a lot of heart. It’s not a ‘wink and nod’ movie, it’s very sincere. They’re absurd but they’re totally sincere and that’s kind of infectious.”

“I’m going to be really corny and I’m going to say love,” ventures Matheson, answering the same question. “Ed and I loved the characters from the start and Bill and Ted love each other. I think that starting point matters. I met my wife on the set too and we’re still together after 30 years, so there’s that little thing,” he grins. “We were young when this thing got made. I was 27, Ed was 26 or 25, Alex and Keanu were probably 22 or something like that. Again to get sappy on you, it really was quite a beautiful experience.” He pauses for a moment. “Plus, both Ed and I are very appreciative of the fact that somehow the meme that we put out into the world was ‘Be excellent to each other’, which is a really nice meme to have out there. We’re both really happy about that.”

This feature originally appeared in SFX magazine, issue 299. Pick up the latest magazine now (below) or subscribe so you never miss an issue.