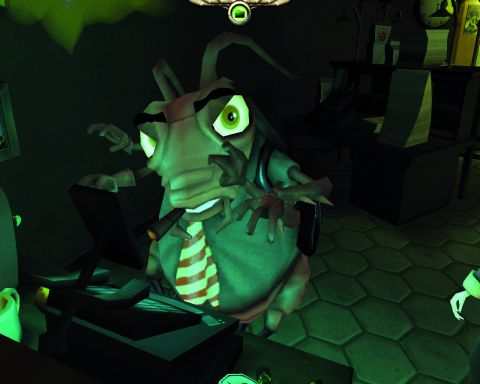 You can’t take a gander at Insecticide’s premise and say “Well, I’ve seen that before a million times.” In the future, mankind’s dominion of Earth has been usurped by the lowly insects, because we used too many chemicals on our crops. Insects grew to man-size (and bigger), became intelligent, and now keep “hominids” around for menial tasks. Okay, doesn’t sound too out there yet, right?

The story is told in a noir detective style, starring cartoon bugs. You play Chrys, a sassy member of the Insecticide division (like homicide – get it?). All of the detective story cliches are piled on, but it’s all supposed to feel clever because they’re bugs instead of people. And they make insect puns. Constantly.

The game alternates between two very different modes of gameplay. In some levels, it’s a third-person platforming shooter. In others, it’s a dialogue tree-sifting and pixel-hunting adventure. If you’re the type that favors one style over the other, you’ll probably find one half of the game extremely tedious. Let’s not gloss over, however, that neither style works within its own genre. So really, the whole thing is tedious.

The action parts involve rudimentary shooting and jumping. The enemies are brainless, standing still and firing away, or sometimes ignoring you as you blast them. Each encounter can be overcome by locking on, then jumping from side to side as you shoot. There are numerous weapons to pick up, but most of them have a much shorter range than your default pistol, which means the pistol is superior in most situations, even though it can take forever to plink down one enemy.